Directed by Barak Goodman, Chris Durrance
An inspirational and instructive documentary about how citizens are fighting back against gerrymandering.

Some days looking at what is happening in American politics and culture, we are filled with worry and even despair about the future of the democracy. And then along comes a report that reveals what citizens are doing to protect and enrich this fragile system. Slay the Dragon brings us such a story. 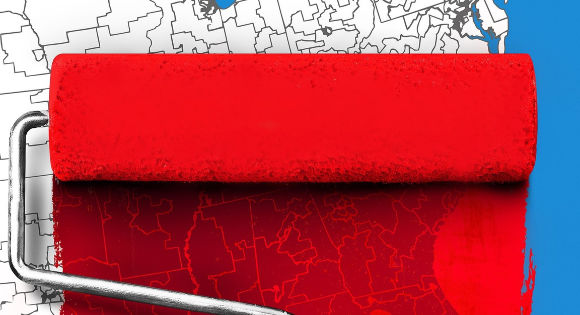 The focus is on gerrymandering, the practice of redrawing electoral maps to serve the political party in power. After the 2008 election, a well-funded, highly partisan program poured money into key districts to gain control of state legislatures charged with drawing the lines for districts every ten years after the census. The "Redmap Project" then used data from the 2010 census and high-tech analysis to make sure that the demographics of each districts matched their objective: districts so ideologically similar that Republican politicians elected from them could stay in power indefinitely. In some cases, this meant making sure that citizens likely to vote for Democrats were split up into multiple districts (called "cracking") so the Democrats would not be able to get majorities in elections. In other cases, voters of the same party were put in the same district (called "packing"), even if it meant drawing odd wiggly and extended lines to gather them all together. The effects of this "redistricting" have been seen in all subsequent elections.

Gerrymandering means, basically, that politicians pick voters, rather than voters picking the politicians. It has meant in many states that legislatures pass laws that the people don't want, and representatives to Congress hold on to their seats as long as they want them. 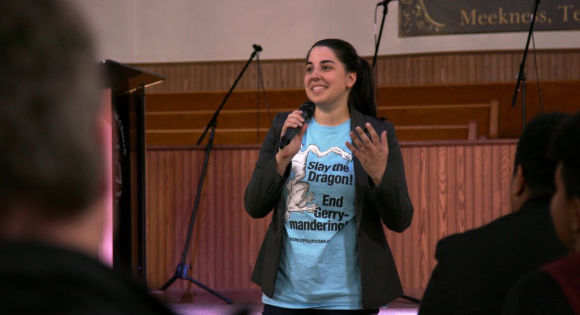 But voters, objecting to this manipulation of the people's right to have fair representation, are fighting back. In Michigan, Katie Fahey, a young woman with no political experience, put a notice on social media that she wanted to fight gerrymandering and asked others to join her. Soon she had a highly motivated group of people of all ages for a movement she named "Voters Not Politicians." The documentary follows their efforts with its many ups and downs. They start by canvassing neighborhoods to get enough signature to get on the ballot their idea of having a nonpartisan commission created to draw the electoral maps, taking it out of the hands of the state legislature. Viewers will find themselves cheering with Fahey as they make progress, crying with her when all seems lost, and experiencing with her all the suspense of waiting to see how it all turns out.

Slay the Dragon is both instructive and inspiring. Eighteen states (so far) have taken actions to end gerrymandering. Whether or not yours in one of them, you can learn a lot about how it's done from this documentary.