Directed by Fernando Grostein Andrade
A spiritually inspiring story about how a young man tries to bring his diverse family together through food.

For centuries, people devoted to one of the world’s religions have had a hard time honoring and welcoming people from other spiritual paths. One reason is deep attachment to their own sacred scripture and revered teachers. Another is a rigid mindset which is locked in tradition and closed to other practices. And last but not least, division among the religions stems from prejudice, racial, and ethnic hatred that is animated by cultural shibboleths as much as by doctrine.

With great delight, we recommend to you Abe, a coming-of age culinary drama that also speaks to interfaith experiences as a portal to the beauty and the bounties of our common humanity. This spirited and endearing comedy is the first narrative feature from Brazilian documentary filmmaker Fernando Grostein who collaborated on the thematically rich religious screenplay with Lameece Issaq, Jacob Kader, and Christopher Vogler. 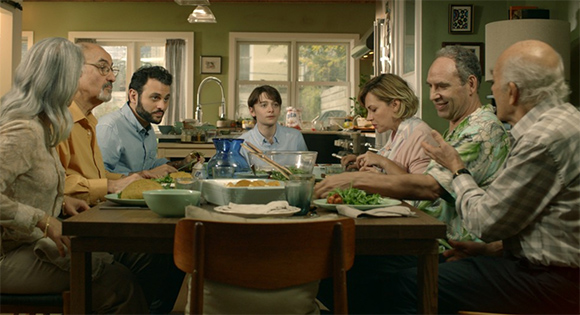 Abe (Noah Schnapp) is smart, multi-talented 12 year old who lives in Brooklyn with his dad Amir (Arian Moayed), an Arab lawyer from a Muslim family who says he’s an athiest, and his mother Rebecca (Dagmara Dominczyk), a Jew. When pushed by his dogmatic and rigid thinking grandparents to choose between Judaism and Islam, he declares that he wants to have a Bar Mitzvah but also will fast during Ramadan.

Each time this contentious Jewish and Palestinian clan gathers for dinner, all they can do is shout at each other, usually about what is happening in the Middle East. Meanwhile Abe spends most of his time alone, which gives him plenty of time to cook. He even makes his own birthday cake, posting a picture on Instagram.

One night Abe discovers a food festival in his multi-ethnic neighborhood. He is immediately attracted to the “Mix It Up” stand featuring the fusion cooking style of Chico (Seu Jorge), a Brazilian chef who blends the look and taste of many different kinds of food. Abe embraces his philosophy that mixing flavors can bring people together.

When his parents enroll him in an amateur and very basic cooking camp for the summer, Abe sneaks away and goes to Chico’s kitchen. He’s happy when the chef says he’ll teach him some things if he helps around the very busy kitchen. This turns into a Karate Kid-like experience where Abe is not allowed to do any cooking until he learns kitchen basics: washing dishes, sweeping up, and taking out the trash. 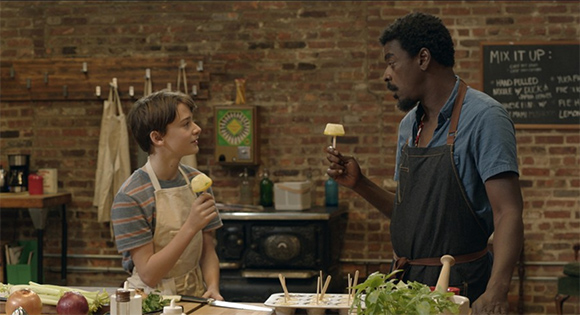 Eventually, though, he has a chance to work on his own dishes under Chico’s guidance. He learns how to mix and match flavors to create harmony. Buoyed by his culinary creativity, this earnest young man decides to create a magnificent Thanksgiving meal using elements from the cuisine of his family’s different cultures.

Adlai Stevenson has written: "I think that one of our most important tasks is to convince others that there's nothing to fear in difference, that difference, in fact, is one of the healthiest and most invigorating of human characteristics without which life would become meaningless." At the tender age of 12, Abe learns how to bring diverse people together. Watching this miracle happen on the screen is spiritually inspiring. The Creator loves diversity, and so do we.