Directed by Rodd Rathjen
A harsh tale of contemporary slavery and human resiliency.

An invisible human trafficking trade is currently keeping our world’s six billion dollar fishing industry afloat. Right now, hundreds of thousands of men and boys are believed to be enslaved aboard ocean trawlers off the southeast coast of Asia, all of them kidnapped and forced into hard, unpaid labor that keeps our demand for cheap seafood (mostly ground into feed for household pets) satisfied. Writer-director Rodd Rathjen is determined to bring this horrific reality to light and, thankfully, the oceanic power of his debut feature Buoyancy will not easily be forgotten.

Unspooling over a tight, tense 90 minutes, Buoyancy follows the doomed journey of 14-year-old Chakra (Sarm Heng) as he escapes his rice farming life in Cambodia, only to be faced with unimaginable cruelty across the border in Thailand. Determined and understandable naive, young Chakra is looking for something bigger than the daily grind of manual work his father has planned for him, and when he learns of the potential to make 8,000 Thai Bahts (around 250 U.S. dollars) working in a factory for a month, he leaves home early one morning. 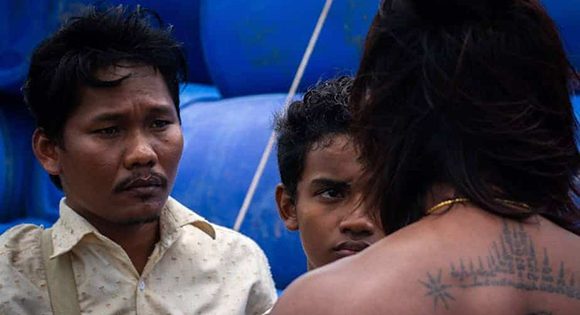 What follows is a test of resilience and endurance that is as harrowing as anything ever seen on screen. Soon after being smuggled over the border, forced onto a rickety ship, and witnessing several acts of verbal and physical violence, Chakra realizes that he’s been duped and surrounded by nothing but open water, he has nowhere to run. Rathjen, inspired by research exposing these kidnappings and first-hand accounts of survivors, fills Buoyancy with both poetic imagery and blunt dialogue. The juxtaposition makes the film feel simultaneously naturalistic and nightmarish, daring its audience to enter the rough trajectory of Chakra’s time at sea and viscerally feel the immense, drifting hopelessness.

The film’s villain, Thai captain Rom Ran (Thanawut Kasro) lords over his trawler with a swaggering cruelty. He always seems to be a moment away from a violent outburst, but he also takes a strange shine to the stone-faced Chakra. As a relationship between the two is established, the boy learns how to survive within the tiny ship’s harsh hierarchy. In this regard, Buoyancy is not only a justice-minded exposé, but it’s also a coming-of-age thriller, one filled with contradictions, especially as Chakra maneuvers the crew’s crude social system and proceeds to take on some of the least attractive characteristics of the man he fears. 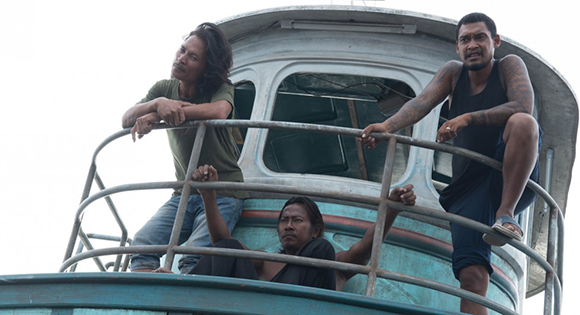 Buoyancy often feels archetypal, with innocent Chakra battling cynical Rom Ran to escape the clutches of an uncaring industry; both characters represent the countless unseen, unique faces forgotten amidst the willful blindness of big global businesses. There are also subtle shadings and characterizations here that leave fresh and multi-layered fodder for post-viewing conversation. At one revealing point, Rom Ran confesses to Chakra that he grew up just as Chakra is, getting a taste of the world’s brutality as a teenager and learning the ropes until he could rule the roost. Chakra, unconvinced that he wants to follow in Rom Ran’s footsteps, realizes that he might have to take a tougher approach to secure his freedom and sets in motion a plan that might save his own life, but will require the end of others’.

Rathjen’s nuanced approach to both the individual and grander moral questions at Buoyancy’s center give the film a spiritual sophistication that transcends its more elemental premise. Chakra’s descent into enslavement forces him into a primitive mindset that will shock sensitive viewers, but it also forces hard self-reflection that will linger in the heart of anyone paying attention. As it presents a reality that many will never experience, but in whose continuance all are complicit, Buoyancy asks what each viewer would do if put in the same situation and what each viewer is going to do with the knowledge they now have. Both questions deserve deep interrogative dives, and Buoyancy suggests that society must swim in these unsettling waters until we are prepared to answer.