Directed by Ethan Hawke
A rousing, ribald, and immensely engaging miniseries on the crusade of abolitionist John Brown to free America's slaves.

John Brown (1800-1889) is regarded as a hero, a saint, and a martyr to some avid readers of American history. To others he a crazy zealot, a sinner, a terrorist, and a fundamentalist Bible quoter.

Our heads swirl. Our hearts beat faster, and we take a long deep breath. Lo and behold, John Brown is standing beside us, shouting his tirades against all those who have slaves and treat them as sub-human; all those who whip them and then hang them from trees with ropes around their necks; all those who violate women and separate black families
from each other.

If you think you have heard and seen all there is to tell about this abolitionist, shuck all that away.

Showtime's seven-episode miniseries The Good Lord Bird is a rousing, ribald, and hugely engaging re-framing of John Brown and the many myths which have spouted up around him. Some are flowers and some are weeds. No need to get upset about that given the confusing and irritating mix of history and exaggerated stories about this figure, with its blend of truth and falsehood, good and bad, fact and fiction. 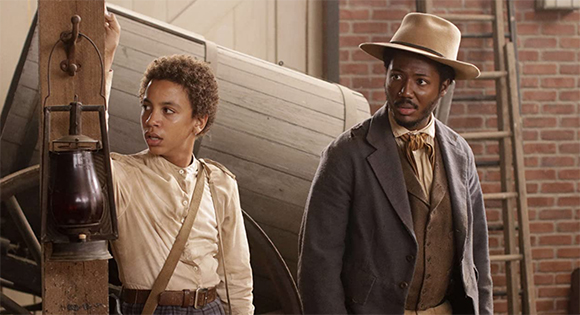 According to a October 2, 2020, article in The Conversation by William Nash, there has been a deluge of interest in John Brown during the past three decades with no fewer than 25 books published about him, including children's books, critical histories, novels, and biographies. One of the most valuable things about The Good Lord Bird is its multi-leveled depiction of this freedom fighter. Nash makes a valid point when he mentions that the civil rights leader Dr. Martin Luther King, Jr., parted ways with him for not using nonviolence in his campaign. On the other hand, Malcolm X stood by this zealot who was willing to lay down his life for his cause; also standing on the side of Brown was Oklahoma City bomber Timothy McVeigh. On a more positive note, Transcendentalist writers Henry David Thoreau and Ralph Waldo Emerson lauded Brown with the following words: "He made the gallows glorious like the cross."

The National Book Award-winning novel The Good Lord Bird was published by James McBride in 2013. It is so sprinkled with comic barbs, silly surprises, and idiosyncratic characters that at times you will forget that John Brown was also an intensely sober and serious crusader out to liberate slaves from their cruel imprisonment. The Showtime version is in the same style.

Although Ethan Hawke does wonders portraying both the explosive ferocity and the shy tenderness of John Brown, he is upstaged by Joshua Caleb Johnson as Henry, a.k.a. Onion, who serves as the narrator of this adventuresome miniseries. In order to survive after his family is killed, he dresses as a girl. He joins Brown's "army" where the fiery abolitionist treats him like one of his own children. Later, he falls in love with Brown's daughter Annie (Maya Hawke). 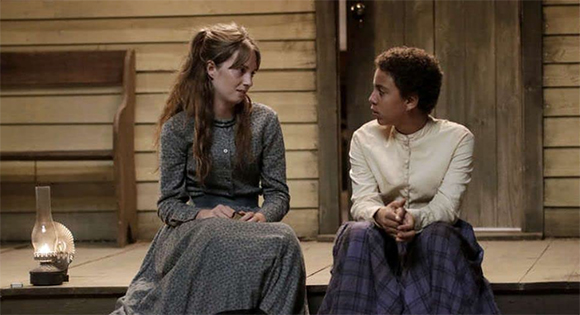 It is through Onion's curiosity and quest for freedom that we witness Brown's encounters with the flamboyant abolitionist Frederick Douglass (Daveed Diggs) and the Underground Railroad leader Harriet Tubman ((Zainab Jah). He also goes along on a trip to Canada to recruit fighters. When Onion tires of the drudgery in Brown's camp he attempts to make it on his own by working at a brothel where he encounters three women who have a lot to teach him about life.

The Good Lord Bird charts the impact of the John Brown on this young slave in 1857 and follows him through the finale at Harper's Ferry in 1859 where his mentor was hanged. As the miniseries ends, we predict you'll agree with Stephen Vincent Benet's poem: John Brown's soul keeps marching' on.