Looking for a Lady with Fangs and a Moustache

Directed by Khyentse Norbu
Lessons in paying attention for a young Tibetan convinced he's dying unless he can find the sacred feminine in the world around him.

We have always been enchanted by the stories Frederick Buechner spins about the paradoxes and complicated conundrums of living. In Faith and Fiction, he notes:

"Day by day, year by year, your own story unfolds — your life story. Things happen. People come and people go. The scene shifts. Time runs by. Time runs out."

These are themes in the films of writer and director Khyentse Norbu. Looking for a Lady with Fangs and a Moustache is the third of his film we have reviewed. He is a prominent lama in the Tibetan Buddhist tradition who served as a spiritual advisor to Bernardo Bertolucci on the set of Little Buddha before going on to write and direct his own films. He shares with Buechner a reverence for the mysteries of human nature and a keen interest in the spiritual practice of paying attention.

Those interests were evident in The Cup (1999), a playful parable about loving others, giving up one's attachments, and practicing compassion to soften the heart, and also in Travellers & Magicians (2003), a quirky and spiritually edifying road movie about the unhappiness created by living in dreamlands of our own making. Looking for a Lady with Fangs and a Moustache is another engaging story laced with Buddhist themes and teachings.

Tenzin (Tsering Tashi Gyalthang) is an ambitious young entrepreneur who lives in Kathmandu, Nepal. He is working on a project dear to his heart: opening the best contemporary coffee shop. Although Tenzin has organized his life around his own special blend of reason, modernism, and secularism, he is aware of the imprint of Tibetan Buddhism on the ancient city. He is quite struck by the beauty and manifold mysteries that strike him when he goes into an abandoned temple he is considering as the locale for his coffee shop. 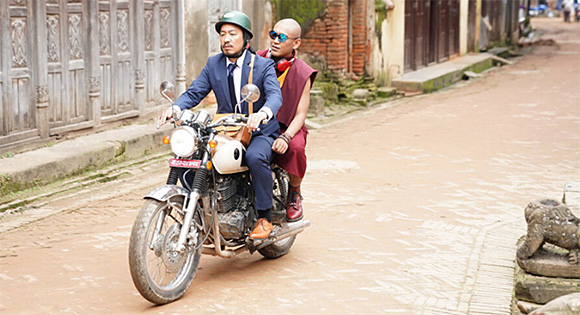 After he shows some pictures of the place to his partner, Jachung (Tulku Kungzang), he learns that he has violated a sacred place known as "the womb of the goddess." Soon afterwards he is unhinged by strange dreams about his dead sister. Trying to find out what these visions might mean, he meets with an unconventional monk (Ngawang Tenzin) who wears sunglasses, headphones, and admits to consulting "omniscient Google." He bluntly tells Tenzin that his dreams mean his life force is waning and his death is imminent.

Skeptical that this could be true, Tenzin goes to see a doctor who says there is nothing wrong with him physically. But the monk continues to insist that he will die soon. His only hope is to find a dakini, a feminine spirit who may or may not have fangs, a moustache, or a third eye. But where? For help with this, he visits the Master of Left Hand Lineage (Orgyen Tobgyal Rinpoche).

Warned that this teacher can be testy, Tenzin approaches him cautiously. He learns that in the Tibetan Buddhist tradition, the dakini has been honored as a teacher and temptress, obstacle and guide, and bringer of comfort. What's more, a dakini can be anywhere and he must be patient to find one. They are far away and near, beautiful and wholesome, ugly and vicious. 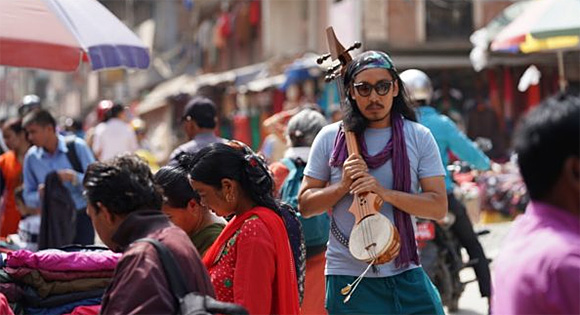 The scenes when Tenzin wanders the streets of Katmandu looking at each woman to see if she might be a dakini are tutorials in the art of paying attention. All the while, it's just possible that the young woman he has been playing music with might be just what he needs.

At one point, the Master of Left Hand Lineage advises Tenzin to be prepared to give the dakini some gifts and that he might try singing to attract one. This advice reminded us of another quote from Frederick Buechner:

"Maybe it's all utterly meaningless. Maybe it's all unutterably meaningful. If you want to know which, pay attention to what it means to be truly human in a world that half the time we're in love with and half the time scares the hell out of us. . . . The good dream. The strange coincidence. The moment that brings tears to your eyes. The person who brings life to your life. Even the smallest events hold the greatest clues. . . . So pay attention." 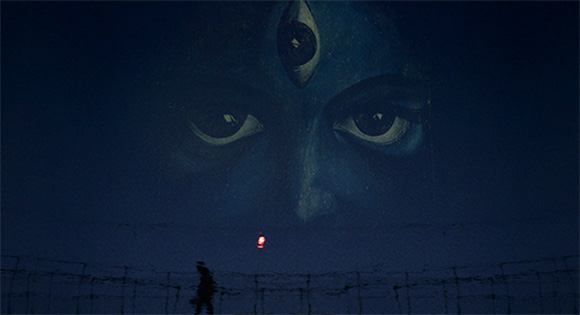 "In this modern, scientific world -- a world on the verge of creating artificial intelligence, and a world that disparages anything not amenable to reason -- I try in this film to explore some of the last genuine residues of Tibetan mysticism. Even among Tibetans themselves, their traditional beliefs and ways of behaving and looking at the world are increasingly rare and today carry little if any weight.

"And yet, I believe this ancient wisdom, which reflects the Buddhist view of reality, has something vital to offer our modern world. Especially, I intend this film to express the deep respect for feminine energy embodied in that wisdom, and to portray in a contemporary setting both the transformative power of this energy and some of the ways it has traditionally been evoked.

"Because it brings together so dramatically these modern and ancient worlds, I felt Nepal to be an ideal setting for this film. Besides the mountains and trekking for which it is popularly known, Nepal is a very spiritual and magical place, and I want to capture that quality both through the eyes of local inhabitants and in the way the film is shot.

"For example, I have given the audience plenty of time for contemplation, so images move slow and may even stand still for a period. As well, I tried catching the magical qualities of life through the eyes of a character who is really panicked, which has been done using hand-held cameras. . . .

"In such ways, and through its atmosphere and techniques, I hope
this film will transport audiences to a profound, mystical, and yet very real and accessible dimension of life with which our modern world is sadly and rapidly losing touch."