The Power of the Dog

Directed by Jane Campion
A sly meditation on masculinity and power.

Even among so many evocative passages packed inside the Hebrew Bible, the words of the 22nd psalm pack a uniquely poetic punch. This plea for deliverance from suffering and hostility begins with a line that is also familiar to many Christians as words cried out by Jesus from the cross, “My God, my God, why hast thou forsaken me?,” and it eventually builds to another shattering scream: “Deliver my soul from the sword; my darling from the power of the dog.” Though there are no swords to be found in the early twentieth century ranching world of Jane Campion’s latest film, the searing spirit of these effective images haunts its every frame.

The Power of the Dog is about strength: who has it, who wants it, who’s lost it, and who’s been hiding theirs until the right moment. Every character, from the meekest to the manliest, is searching for identity and belonging, trying to keep up appearances until they can no longer keep up the act. The film itself holds its most devastatingly powerful cards close to its puffed out chest until its last moments, allowing tension to build until it nearly strangles its audience.

In 1925 Montana, brothers Phil and George Burbank (Benedict Cumberbatch and Jesse Plemons) are as different as can be. Phil is a rough, muscled, and menacing man’s man while George, round, gentle, and calm, quietly puts up with Phil’s nicknaming him “Fatso.” Though the relationship is tense, there’s a codependent bond connecting them. Phil handles the earthier responsibilities of their wealthy family’s ranch while George picks up the administrative tasks. Both single, the men act almost like a platonic married couple, heading a team of rowdy cowherds in an exclusively male world and playing their roles seemingly without much reflection. 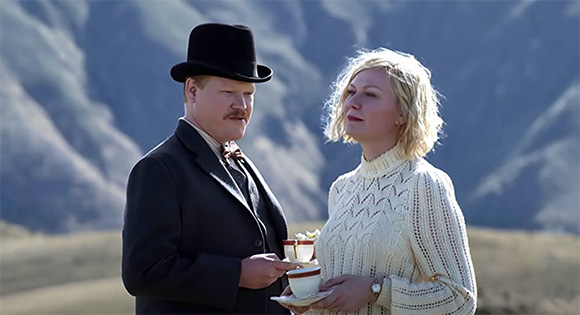 This pat picture of aggressively brotherly love is interrupted when George meets and weds the jittery widow Rose Gordon (Kirsten Dunst) and she and her sensitive and unapologetically odd son Peter (Kodi Smit-McPhee) invade the fragilely constructed, femme-denying environment on which Phil depends. Upon their first encounter post-wedding, Phil calls Rose “a cheap schemer,” and from here, an often-wordless turf war begins, unfolding as a series of uneasy episodes that softly simmer until the entire film froths with unbearable inquietude.

Based on Thomas Savage’s subtly shocking 1967 novel, Campion’s intensely measured adaptation may test some viewers’ patience, but its agonizingly unhurried build is an imperative part of the point. An entire history of centuries of testosterone-pumped toxicity is dismantled in The Power of the Dog and just when it seems that all of the complex layers of the film’s deliberate deconstruction have been revealed, a final reveal nearly begs for an immediate second watch. 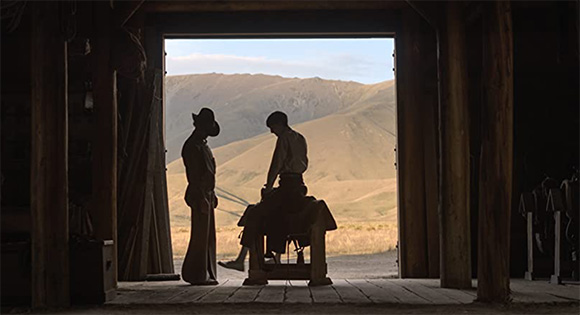 Each moment is so deliciously stomach-turning, so infused with skewed spirituality, that to outline any more of them here would be an act of cruelty. The tortuous slow motion proves necessary to Campion’s sly takedown of traditional machismo tropes and its coyly shocking climax, one in which the meek just might inherit the earth, is worth the wandering and the wait. Shadows bedevil every soul in this story, each of them walking wounds barely protected by their extremely thin skin, and by the end, it’s not only the scars and sickness of these indelibly drawn characters who are starkly on display, but an entire culture that has been infused with and infected by harmful binaries for millennia.

The Power of the Dog does not clearly lay out its message and its moral judgments remain murky, but that might be its gutsiest move. No one is purely a saint or a sinner, no one plainly passive or dominant. This is a film about deliverance from these categories and the price required to free oneself from the destructive demands of a world designed to break the gentlest spirits. Its questions burrow into the heart with serene force, squeezing the poison of patriarchy from every open gash, upending assumptions, and ultimately showing that truly enduring power might not appear powerful at all.