Directed by Daniel Roher
A tribute to a heroic Russian freedom fighter.

“Because we are free, we can never be indifferent to the fate of freedom elsewhere."
— former President Jimmy Carter

Alexia Navalny is a currently imprisoned Russian opposition leader who has paid a high price for his prophetic critique of corruption in Russia during Vladimir Putin’s presidency. Director Daniel Roher has made a riveting documentary that plays out like a modern-day thriller about Navalny’s advocacy of peaceful political change and his use of his personal charisma and social media tools to advance his views. The film screened at the 2022 Sundance Film Festival where it received the Audience Award in the U.S. Documentary Competition as well as the Festival Favorite Award. It had us sitting on the edge of our seats as we wondered how each chapter of this story would unfold. 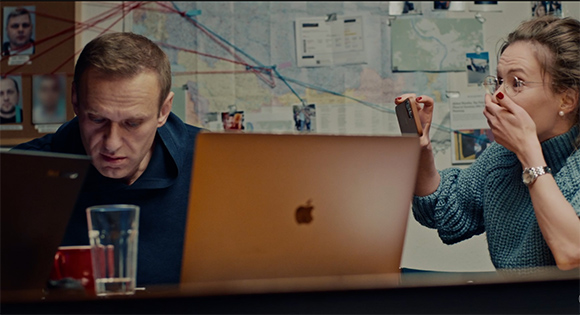 The director assumes a fly-on-the-wall position as he follows Navalny through public appearances and private meetings with his inner circle, including Maria Pevchikh (who leads the investigative arm of the Anti-Corruption Foundation, Navalny’s organization) and Christo Grozev (from the investigative group Bellicat). His wife Yulia Navalnaya is also a strong supporter, even when some of her husband’s decisions mean his possible death and likely imprisonment.

After many threats to his life, Navalny was poisoned in 2000 on a trip to Siberia. Although doctors claimed that there were no toxins in his system, after he went to Germany to recover, German physicians identified the poison as a military nerve agent. As we watch, Navalny and his team track down those who tried to kill him. In a surprising moment, he gets a Russian operative on the phone and the man explains exactly how they were able to poison him. 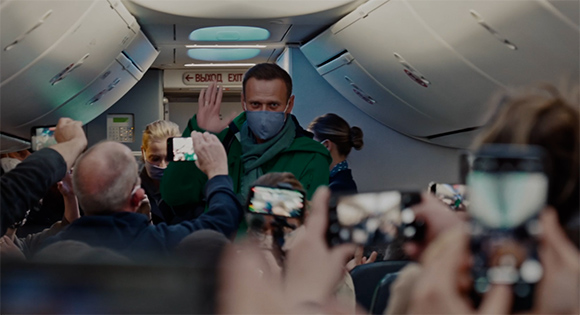 Even after this incident and other threats to his life, Navalny continues to demonstrate his dedication to his cause and his love of his country. He bravely decides to return to Russia, where he is promptly arrested and put in prison. He remains there to this day.

On October 20, 2201, Navalny was awarded the Sakharov Prize for Freedom of Thought, the European Union’s top human rights award. David Sassoli, president of the European Parliament, was quoted in The New York Times:

“He has fought tirelessly against the corruption of Vladimir Putin’s regime. This cost him his liberty and nearly his life. Today’s prize recognizes his immense bravery and we reiterate our call for his immediate release.”

The Sakharov prize is named after the nuclear physicist and Nobel Peace laureate who led the Soviet Union’s development of the hydrogen bomb but in the late 1950s became disturbed over the dangers of nuclear fallout contamination. He later became an indefatigable advocate for disarmament, peace, and human rights. We applaud the European Parliament for putting Alexia Navalny in the same category.