Directed by Sebastian Lelio
A mystery set in 1862 Ireland in which reason is pitted against faith as a nurse tries to figure out a so-called miracle.

People really want to believe in miracles. They devour newspaper reports of signs in the sky, inexplicable cures, or supernatural phenomena like weeping statues.

The Wonder is an engaging and complex tale set in Ireland in 1862, a decade after the end of the Great Famine that devastated the country leaving nearly one million dead. In a small town, the villagers are convinced they are witnessing a miracle. 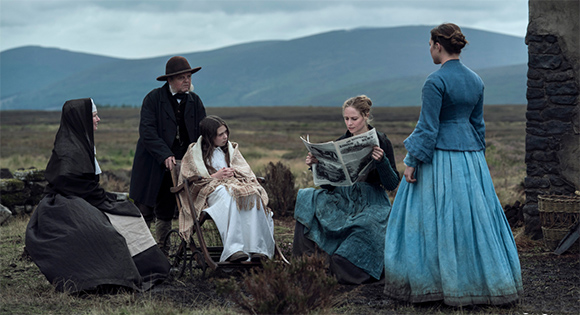 Lib Wright (Florence Pugh), an English nurse from London, arrives in a small town to observe Anna, an 11-year-old pious Catholic girl (Kila Lord Cassidy) who has not eaten for four months. She believes that “manna from heaven” is keeping her alive. The town doctor (Toby Jones) and priest (Ciaran Hinds) along with a committee of men have hired Mrs. Wright to find out what is going on. She and a nun (Josie Walker) watch the girl in separate eight-hour shifts. Also interested in how the girl can survive without food are landowner (Brian F. O’Byrne) and a journalist (Tom Burke).

Chilean director Sebastian Lelio does a fine job orchestrating the multiple themes of sacrifice, fasting, and religious repression in the storyline. The nurse’s rationalism clashes with Anna’s faith as questions arise about who really has the girl’s best interests in mind. It’s an age-old conflict that this miracle mystery story explores head-on.