Directed by Ron Howard
Drama based on the true story of the courage, persistence, and ingenuity of an international community rescuing 12 soccer players and their coach from a flooded cave in Thailand.

On June 23, 2018, twelve members (aged 11 to 16) of an amateur Thai soccer team and their assistant coach decide to take a break from practice and visit a local cave. They leave their bikes and backpacks behind before venturing into the underground tunnels. Shortly afterwards, heavy rains pour down, flooding the cave and imprisoning the boys deep within as the waters began to rise. They find refuge on a narrow ledge. Some of the boys meditate while others try to dig their way out. 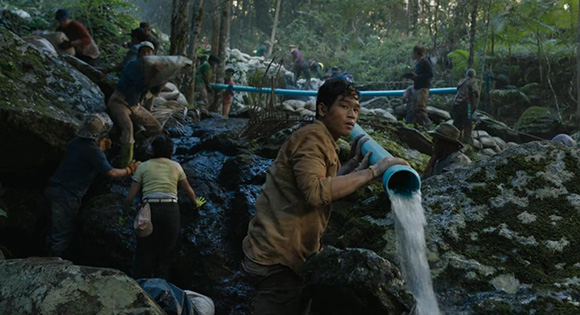 This is a true story so many filmgoers will already know how it ends. Still, you will sit on the edge of your seat as the rescue proceeds. You will also marvel at how the community of divers and volunteers – 5,000 people from 17 countries – work together during the 18-day rescue effort. Director Ron Howard, mining our emotional connections with the people involved, presents all the complicated details. Speaking about the movie at the London premiere, Howard said:

“There are many brands of risk taking and courage on display, much of it is physical, all of it is emotional. . . . It was a labor of love from top to bottom.

“Authenticity was vitally important. My goal was to try to convey to an audience really something of what it was like to be there and achieve what these divers achieved. But it was much more complicated than I expected. The cave sets were so enclosed. There was barely room for a camera, so the actors ended up having to film each other!”