Directed by Ron Howard
The incredible story of a brilliant Nobel Prize-winning mathematician whose wife helps him hatch his heart during a protracted struggle with schizophrenia.

In 1947, John Forbes Nash, Jr., (Russell Crowe) arrives at Princeton for graduate study in mathematics on a scholarship. This West Virginia genius has high hopes of coming up with a truly original idea that will set him apart from his peers. While his classmates go through the traditional process of studying and writing papers, Nash doesn't attend lectures at all, seeing himself as a lone wolf. His best friend and roommate, Charles Herman (Paul Bettany), provides a lightheartedness that is totally lacking in his own life.

It is by chance that Nash stumbles upon a game theory that challenges the essential premises of Adam Smith, the father of modern economics. His advisor at Princeton, Professor Helinger (Judd Hirsch) hails this discovery as a major breakthrough. Nash lands a prestigious post at a top defense laboratory at MIT. He takes along with him two classmates, Sol (Adam Goldberg) and Bender (Anthony Rapp).

The Cold War is sending waves of fear and paranoia across the country when Nash is called upon to do some code-breaking work for the Pentagon. His prestige is at a high point during this period when he appears on the cover of Forbes Magazine. Nash's pride really flares up when William Parcher (Ed Harris), a shadowy figure at the Defense Department, contacts him for a top-secret mission.

Meanwhile, on a much more mundane level, the math whiz teaches classes at MIT. Alicia (Jennifer Connelly), an attractive and smart student, seems interested in him. Always ill at ease with people in social settings, Nash agrees when she essentially asks him out. On the first date, she gives him a pocket handkerchief so he'll look right when he is photographed with the governor at a party. It's clear that she is not uncomfortable with his awkwardness. They eventually marry. But their relationship is rocked when Alicia discovers that Nash suffers from paranoid schizophrenia and several of the most important people in his life are actually hallucinations of his mind.

This compelling and thoroughly engaging film was inspired by events in the life of mathematician John Forbes Nash, Jr. The screenplay written by Akiva Goldsman draws on material in Sylvia Nasar's A Beautiful Mind. Ron Howard as director has fashioned a drama about the slow hatching of Nash's heart. Early on, the mathematician recalls a second grade teacher's evaluation of him as having been given two helpings of brain but only one helping of heart. So Nash goes through most of his life ashamed of his inability to relate to people with ease or grace.

Alicia, however, refuses to give up on him. While her husband undergoes electroshock therapy and heavy doses of medication, she courageously stands by her man. At one point when Nash reveals his anguish at not being able to tell the difference between what is real and what is not, his wife puts her hand on his face and his hand on her heart, saying "This is what is real." But the strain of living with a schizophrenic nearly exhausts her physical and emotional reserves.

Nash struggles for years to keep his equilibrium despite his illness. Finally, he returns to Princeton where Hansen (Josh Lucas), his old rival from years ago, first allows him to use the library and eventually gives him a teaching position. In 1994, the mathematics genius is awarded a Nobel Prize for his game theory. Of course, by then, he has realized the truth of Helen Keller's observation: "The best and most beautiful things in the world cannot be seen or even touched; they must be felt in the heart."

A Beautiful Mind received four Academy Awards including Best Picture of 2001, Best Director, Best Supporting Actress for Jennifer Connelly, and Best Adapted Screenplay for Akiva Goldsman. The “two-disc awards edition” DVD even includes the winners’ reactions on Oscar night. It also has feature commentaries from Ron Howard and Akiva Goldsman, production notes, theatrical trailer, and extensive material on the making of the film, including featurettes on the development of the screenplay, casting, storyboard comparisons, creation of the special effects, an interview by Ron Howard with the real John Nash, and more. 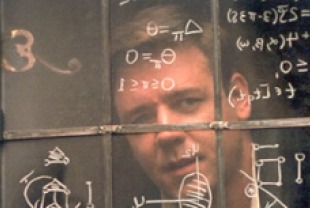