Directed by Tom Shadyac
A beautiful afterlife drama conveying how great gifts can be hidden in death and how they can bear fruit in our lives if we have the faith to let them unfold.

Dr. Joe Darrow (Kevin Costner) is head of emergency services for Chicago Memorial Hospital. His wife Emily (Susanna Thompson), also a physician, was a volunteer with the Red Cross in Venezuela. He had tried to talk her out of this mission of mercy because she was pregnant. But Emily believed her vocation was to serve and heal those who needed her. Then Joe learns that a bus on which Emily was traveling has crashed during a storm on a remote mountain road, and no survivors have been found. He is unhinged by grief, anger, and guilt.

Six months later, Emily’s body hasn’t been recovered. Joe is working 20-hour shifts and making bad judgment calls, according to his supervisor Hugh Campbell (Joe Morton). He orders him to take some time off to grieve properly.

Then Joe’s neighbor, Miriam Belmont (Kathy Bates), a lawyer, gives him a package from Emily. It turns out to be a dragonfly mobile she ordered before leaving for Venezuela. Their house is filled with various depictions of this insect, including a paperweight near their bed. The dragonfly was her totem because of a birthmark in its shape on her shoulder.

Remembering a promise he made to Emily to look in on some of her young patients, Joe goes to the hospital’s oncology ward. There he meets Jeffrey (Robert Bailey, Jr.), an African-American boy who has come back from death a number of times. He claims to have seen Emily and that she is trying to communicate with Joe. All over his room are pictures the boy has drawn of a squiggly cross. When Jeffrey asks Joe what he thinks it is, the doctor responds: “A crucifix made of jello.” They both laugh, but Joe is mystified by Jeffrey’s account of his near-death experience and his meeting with Emily.

Later, the doctor meets Ben (Jacob Smith), a boy who was brought into the hospital in a coma. He tells Joe that Emily, whom he never met, appeared to him and wants her husband to go “to the rainbow.” “And how would I do that?” the doctor asks. There is no response from Ben.

While Joe struggles with the quest that he’s been asked to undertake, he shuns a meeting with a grief counselor. Several telekinetic incidents at the house, along with the strange antics of Emily’s bird, convince Joe that he must be losing his mind. Miriam, a true rationalist, tells her neighbor to get a grip and take a vacation.

But Joe continues his search by meeting with Sister Madeline (Linda Hunt), a Catholic nun whose interviews with children at the hospital about their near-death experiences got her into trouble when the press exaggerated her statements. She confirms Joe’s feeling that Emily is trying to get in touch with him from beyond the grave. Convinced that her messages need to be acted upon, Joe prepares to take a leap of faith and continue his dance with Emily even though she has left her physical body.

Although there have been a handful of afterlife dramas proclaiming that love is stronger than death, this is one of the best. Tom Shadyac (Patch Adams) directs from a screenplay by David Seltzer, Brandon Camp, and Mike Thompson from a story by Camp and Thompson. The drama convincingly depicts the various stages of Joe’s journey of the heart and the hurdles that stand in his path including the skepticism and cynicism of those closest to him. Kevin Costner puts in a stellar performance as a doctor whose love for his wife and his respect for her as a spiritual person take him on an adventure beyond reason.

Dragonfly beautifully conveys how great gifts can be hidden in death and how they can bear fruit in our lives if we only have the patience and the faith to let them unfold.

The DVD edition includes commentary by Director Tom Shadyac, an interview with bestselling author Betty Eadie on her near-death experience, and a "making of" featurette. 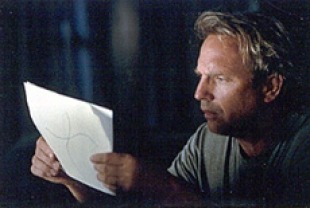