Directed by Steven Spielberg
An audacious and imaginative sci-fi thriller that enables us to witness the dangerous consequences of our present fear-based way of living where we are willing to sacrifice our freedoms for the pipe dream of safety and security.

Americans are a fearful people. Years ago, residents of big cities were frightened to walk the streets at night because of rampant crime and drive-by shootings. Since 9/11, the public is reeling from fear of terrorism. People in all parts of the country report having panic attacks, sleepless nights, and dreams of death. The old amenities toward strangers have vanished. We are distrustful of people we don't know, and even of some we know. God forbid, but what if that person is a terrorist? The media fuels this paranoia with constant warnings of likely targets and plausible weapons. The fact that most of the threats cannot be confirmed and few arrests of suspects since September 11 have stuck does not diminish the warnings' power to scare the living daylights out of us.

In this post-9/11 world, we have settled into the house of fear. The results: The public seems willing to accept any policy that promises greater security and safety. Americans are handing over to those in power permission to spy on people, abrogate their human rights, and even to consider a military first-strike against suspected terrorist nations. Fear is one of the most effective tools in the hands of those who want to control us.

In a time when fear has taken on apocalyptic dimensions, the release of Steven Spielberg's Minority Report arrives like a blessing. Scott Frank and Jon Cohen have adapted the screenplay from a story by Philip K. Dick (Blade Runner). This science fiction drama takes place 50 some years from now in Washington, D.C. The citizens have become convinced that "that which keeps us safe also keeps us free." Sound familiar?

The best sci-fi tales have always been an early warning system of the dangers inherent in present-day values, public policies, technological developments, and societal trends. This one enables us to witness the possible consequences of our fear-based way of living where we are willing to sacrifice our freedoms for a pipe dream of safety and security. At the core of this powerful and profound movie is the all-important question: What are we prepared to give up in order to have a crime-free society?

In the year 2054, John Anderton (Tom Cruise) heads the elite Pre-Crime division of the Justice Department in Washington, D.C. He decided to dedicate himself to the eradication of violent crime after his young son was kidnapped and presumed murdered. Lamar Burgess (Max von Sydow), his boss, is proud of the fact that not one person has been murdered during the six years that the Pre-Crime experiment has been in existence.

The system depends on the visions of three psychically gifted "Pre-Cogs" who are sequestered in a womb-like chamber, suspended in fluids, and kept in a dreaming state through drugs. The twins and Agatha (Samantha Morton) are able to see murders before they are committed. The data streams of their visions are fed through a computer to John and his team of detectives. They organize this material into a profile of the killer and the place of the crime.

In the suspenseful opening scenes of the film, John tracks down a jealous husband (Arye Gross) who is about to murder his wife (Ashley Crow) and her lover. This man is subdued before he commits the crime. Still, he is arrested and sent to the Hall of Containment, a state-of-the-art suspension chamber where prisoners are stacked end-to-end in pneumatic tubes. All those there were arrested before they did anything — pre-crime.

John's brittle sensitivities are heightened when Burgess tells him that the Attorney General's office wants to take over the Pre-Crime operation on the eve of a referendum to decide whether or not to make the project national. Danny Witwer (Colin Farrell), an FBI agent, arrives in John's command center to audit the system and make sure it has no flaws. This former seminary student has a low estimation of human nature and is bothered by the adoration given to the Pre-Cogs. He's intrigued that the room they are in is called the Temple. One of John's associates tells Danny that sometimes he feels more like a priest than anything else given the way in which he's able to witness destinies being determined in life and death situations. Meanwhile a reporter notes that the Pre-Cogs have received eight million pieces of mail in support of their work in saving lives. The journalist concludes that they're more popular than Santa Claus.

Snooping around John's apartment, Danny discovers evidence of drug use. The chief's troubles magnify when the Pre-Cogs have a vision that he will murder a stranger in 36 hours. John is so stunned by what he and his associates witness on the screen that he immediately flees the command center. The thrilling chase sequence that follows begins in his Magnetic-Levitation car and ends at a car factory where robots are at work on an assembly line. John realizes that he is now a fugitive in a society where privacy is a thing of the past.

He pays a visit to Iris Hineman (Lois Smith), the scientist responsible for discovering the Pre-Cogs. This eccentric woman, who has a penchant for exotic plants, alerts John to the presence of "minority reports" on instances when the Pre-Cogs disagree with each other. The discrepancies are hidden to avoid any possibility of reasonable doubt of the guilt of pre-criminals.

To find out if an alternate future, other than as a murderer, exists for himself, John will have to get back into the Temple. This is not so easy since all citizens are now ID'd by eyeball scans. Small cameras are everywhere keeping track of the movements and buying habits of the public. To foil the system, John is forced to get an eye transplant from a sleazy black market doctor (Peter Stormore).

After liberating Agatha from the Temple, he takes her to Rufus (Jason Antoon), a technological wizard who hacks into her brain in search of the minority report. John and Agatha then hide out with his ex-wife Lara (Kathryn Morris). As the hours tick away, they head toward the apartment complex where John is destined for his encounter with a mysterious stranger.

Although Spielberg's A.I. Artificial Intelligence was a substantive sci-fi thriller, this one is even more poignant and powerful on a visceral level because of its relevance to the current reign of fear in America. It is interesting to watch how the citizens open themselves up not only to the surveillance cameras and mobile robotic spiders that take eyeball prints but also to the corporations and stores who use talking billboards to customize messages to consumers. Even more interesting is watching the maneuvers of those in power who can't allow any questioning of the system. You can't help but wonder how much of this is also a projection of the present into the future.

Minority Report is destined to become a sci-fi classic. It bears repeated viewings to take in all the special details and meanings.

The DVD edition has many extras on the making of the film incorporating interviews with director Steven Spielberg and star Tom Cruise. A section on "From Story to Screen" covers development of the story and its characters. "Deconstructing Minority Report" gives insight into the precogs, spyders, vehicles, and other unique elements in the film. The "Archives" section includes the production notes, production concepts art, storyboards, trailers, and still photos. 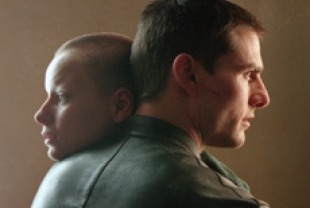