Boys on the Side

Directed by Herbert Ross
A touching drama about some idiosyncratic people who must learn how to help and be helped by those who cherish them.

Jane, a cynical club singer in New York City, decides to jump-start her dead-in-the-water career by moving to Los Angeles. She hitches up with Robin, an uptight young woman in real estate who is driving to San Diego. The two couldn't be more different in background and temperament.

For example, one evening at a motel, Robin watches The Way We Were and cries. Jane can barely stifle her laughter over the romantic melodrama unfolding on the screen. The two women stop in Pittsburgh so Jane can visit Holly, a friend. They catch her in the midst of a battering by her drug dealing lover. Given his rage and hatred of women, they are lucky to escape with their lives.

On the road, the three relax and luxuriate in each other's company. But they do have serious questions about one another. Jane can't understand why her friend constantly chooses men who humiliate and abuse her. Holly wonders why Jane hasn't told Robin that she's a lesbian. And when they pull into Tucson, Robin has to be hospitalized. The two other women are shocked to learn that she has AIDS.

It is a delight to watch Whoopi Goldberg, Mary-Louise Parker, and Drew Barrymore tackle the idiosyncrasies of these colorful characters. Director Herbert Ross brings the same sensitivity to this women's drama as he did to The Turning Point and Steel Magnolias.

The film is essentially about the way these three are thrown together by chance and then become a family. It is also about the strange yet wonderful ties of friendship which link people together when they least expect it.

But most of all, Boys on the Side is about generosity and care. Jane, Robin, and Holly set up house together in Tucson. They come to rely upon each other especially when Holly gets in trouble with the law and admits that she is pregnant. Robin's health worsens and she learns to lean on Jane. How to help and be helped by those who cherish us is sometimes difficult to know. But it is a lesson worth learning. As Merle Shain has written, "We must find ourselves in others, and in loving and caring for them, we love and care for ourselves." 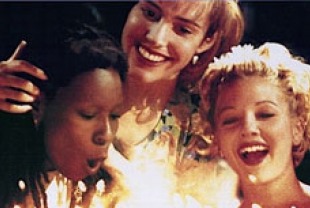