Directed by Hayao Miyazaki, Kirk Wise
A Japanese animated feature that is nothing short of wonderful with its ten-year-old female protagonist and its steadfast refusal to set up a dualistic battle between good and evil.

Far too often adventure movies set in strange worlds climax with a battle between the forces of good, represented by the hero or heroine, and the forces of evil, represented by the stranger, the odd, or the mean-spirited — for example, a witch, sorcerer, power-mad ruler, or someone else who uses their power inappropriately. These scenarios, like the recent Lord of the Rings, make it all too easy for filmgoers to cheer for the good guys (with whom they quite naturally identify) and boo the bad guys (stand-ins for everything they don’t approve of). The world is seen as the stage for dueling dualisms, "us" versus "them" where it is perfectly acceptable for one side to completely obliterate the "other."

Is this just harmless entertainment? Or does this kind of simplistic storytelling contribute to the creation of what Sam Keen has called the "hostile imagination"? This worldview develops out of prejudice and hatred, two diseases of the mind in which we project our feelings of fear, resentment, self-disgust, anger, alienation, and paranoia on others whom we perceive to be different (especially strangers). Fortunately, antidotes are available in the spiritual practices of hospitality, empathy, self-esteem, compassion, and forgiveness.

And sometimes a movie gets it right. Spirited Away is an English-language version of a Japanese animated film by acclaimed filmmaker Hayao Miyazaki. A ten-year old girl named Chihiro becomes lost in an alternate universe and must find within herself the pluck and the love to endure a series of dangerous tests before she can go home. It will remind some viewers of Alice in Wonderland and The Wonderful Wizard of Oz. It is nothing short of wonderful to have a female protagonist on screen who engenders our empathy and support.

Equally refreshing and unusual for animated features is Miyazaki's refusal to set up a dualistic battle between the little girl and an evil adversary. All the central characters have both a light and a dark side. Our heroine must overcome the forces of fear, entitlement, selfishness, gluttony, and greed within herself as part of the blooming of her soul. Little Chihiro does what spiritual seekers will recognize as "shadow work" — taking back her projections, learning to love all parts of herself, including those mirrored by others — healing both herself and those around her in the process.

The film is a follow-up to Miyazaki's extraordinary Princess Mononoke (1997). Once again he has fashioned an animated feature which transports us to a mysterious and always surprising world of spirits. In Shinto folklore, everything in nature has a god living within it. And as we learned in his last film, these beings are vulnerable to the excesses and defilements of humanity.

The story begins as Chihiro (voiced by Daveigh Chase) and her parents (Lauren Holly, Michael Chiklis) are driving to their new home. She is sulking in the back seat, anxious about the future. Her father takes a wrong turn, and they wind up driving through a bumpy forest road to a hillside tunnel. When her adventuresome parents decide to explore the place, Chihiro is frightened and doesn't want to go ahead. But she follows them, and they enter what her father decides must be a deserted theme park. When he smells the odors of food, they follow the scent and come upon a row of restaurants and one empty one where food is piled high on the counter. Chihiro's parents begin devouring the fare and, to their daughter's dismay, are turned into pigs. Chihiro flees this scene and soon realizes she has stumbled into a world of spirits. A strange boy named Haku (Jason Marsden) comes to her assistance, shows her how to keep from becoming transparent in this world, and how to cross a bridge without being detected as a human. Still, Chihiro is pretty scared.

Haku tells her that to save herself and her parents she needs to seek employment in a huge bathhouse that caters to all kinds of strange-looking nature spirits. He sends her to the boiler room where the keeper, Kamaji (David Ogden Stiers), is assisted by hundreds of little soot-balls that carry coal to the furnace. They take quite a fancy to the human girl. Eventually, she meets Yubaba (Suzanne Pleshette), the greedy and selfish sorceress who runs the bathhouse. This dominating woman puts her to work as a bath-attendant but not before taking away her name and giving her a new one, Sen. She is assigned to Lin (Susan Egan), another human. Their biggest challenge comes when they must deal with the "Stink Spirit," an incredibly foul smelling being. Only after his bath do they discover that he is a once noble and proud River God who is filled with sludge and worthless junk. Sen also proves her mettle in her relationship with Kaonashi (or No-Face), a lonely figure who follows her around and eventually brings havoc to the bathhouse spirits by drawing out their yearning for gold.

The Japanese version of Spirited Away, the most successful film ever to play in Japan, won the coveted Golden Bear Award at the 2002 Berlin Film Festival. The English language version, which uses the same animation, was guided by executive producer John Lasseter of Pixar Studios (Toy Story), director Kirk Wise, and producer Don Ernst. Similar in spirit to Princess Mononoke, this animated feature can be thoroughly enjoyed by both adults and children. It is a cross-cultural masterpiece that takes us to an unfamiliar world where we see familiar things with fresh eyes. For example, Miyazaki provides an ongoing commentary on contemporary society in Japan and elsewhere with the characters of Chihiro's gluttonous parents who are turned into pigs; Yubaba's gigantic baby, a spoiled brat who gets whatever he wants; and lonely No-Face whose efforts to use his wealth to make others like him backfires.

The transformation of Chihiro from a sulky, clinging, and fearful little girl into a resourceful, loving, sensitive, and respectful person is a marvel to behold. Her most magic moment comes when she embraces Haku's dark side which manifests as a dragon. Instead of turning against him, she reaches out to help him in his mission to discover his true identity. That's what is so remarkable about Spirited Away, it acknowledges the shadow elements in everyone and works with these warps as part of the process of soul-making.

Spirited Away frees us from excluding anyone from our world and helps us to see that we are all in this together — human beings and spirits, ghouls and benevolent ghosts, dragons and No Names. Or as John R. Mabry has put it: "We must not despise the rough, the dark, the empty, the flawed or the crooked. It is a package deal."

The two-disc DVD edition contains a 15-minute featurette, "The Art of Spirited Away," a 40-minute "Making of. . ." Nippon television special, a 10-minute story-board-to-scene comparison, plus 16 scene selections. It also has a passable dubbed version, for those who want to concentrate on the artwork instead of reading subtitles, as well as 22 original Japanese theatrical trailers, with optional subtitles. 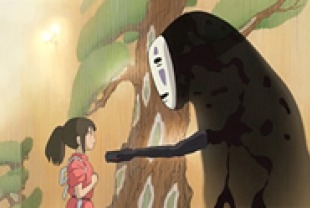 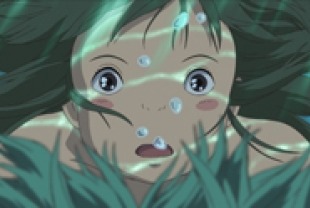