Directed by Paul Schrader
An intense drama about a full-fledged sex addict who is in complete denial about his condition.

In 1964, Bob Crane (Greg Kinnear) is sitting pretty with a very successful career as a popular Los Angeles radio host. He and his strict Catholic wife and former high school sweetheart Anne (Rita Wilson) have three children. Then his agent Lenny (Ron Leibman) delivers an offer from the producer of a new television pilot for the lead in a comedy set in a World War II prison camp. Crane complains: "It sounds like a career killer to me." But when Hogan's Heroes premiers in 1965, it ranks number one among the new shows for the season. He's soon flying high in a role that fits his easy going and wise-cracking sensibility. But things take a dive downwards at home when Anne discovers some girlie magazines in the garage.

Then Bob meets John Carpenter (Willem Dafoe), a technological wizard who is selling videotape equipment. In addition, he shares the television celebrity's fascination with nude women. Carpenter invites Crane out to a strip joint. Sensing that something is amiss in her marriage, Anne orders her husband to see a priest (Don McManus). Crane confesses to going to late night clubs and watching strippers. "It's not easy to resist temptation," says the priest. "You must remove yourself from the occasion of sin." But soon enough Crane and Carpenter are having sex with women they pick up and realizing they share a common compulsion. Later, they begin videotaping their escapades.

The exploration of sex addiction in Auto Focus adds another cinematic work to director Paul Schrader's collection of dramas on sexuality: The Comfort of Strangers, American Gigolo, Hardcore, and Mishima. The screenplay by Michael Gerbosi is based on the book The Murder of Bob Crane by Robert Graysmith. Greg Kinnear gives a mesmerizing performance as a full-fledged sex addict who is in complete denial about his behavior. Crane sees himself as likeable guy with a quaint hobby. But he and Carpenter share some of the same warps: they use sex to avoid rather than enhance intimacy; they are obsessed with women's body parts; their desires are so urgent that they are fulfilled only by rigid rituals; and underneath all this social activity, they are both very lonely. Their friendship undergoes some twists and turns, especially when Crane discovers that Carpenter may be bisexual.

The favorite saying for these two is "A day without sex is a day wasted." Crane's selfishness and compulsiveness lead to the end of his marriage. He weds Patricia (Maria Bello), an actress from his TV series, but his addictive behavior soon makes her into a lonely and angry woman as well. While on the road doing dinner theatre, Crane feeds his voracious appetite for new sexual experiences, especially after his "penile enhancement." The former television superstar hits an all-time low when he appears on Celebrity Chef and insults a woman in the audience with some crude remarks. Crane's eventual split with Carpenter leads to his violent demise.

The DVD features three commentaries: one with stars Greg Kinnear and Willem Dafoe, another with director Paul Schrader, and a third with the producers and writer Michael Gerbosi. It also includes five deleted scenes, including an alternate beginning to the film, and a documentary called "Murder in Scottsdale" about the demise of the real Bob Crane. 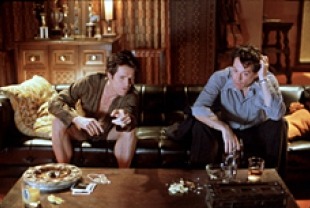 R – strong sexuality, nudity, language, some drug use, and violence