Directed by Gus Van Sant
A drama about the small events leading up to a shooting spree at a high school.

Using the same austere and indirect cinematic technique that characterized Gerry, writer and director Gus Van Sant (Good Will Hunting, Finding Forrester) follows a small crosscut of students at a Portland, Oregon, high school on a day when two of their number will put all of their lives in jeopardy. In the details of a few hours leading up to a shooting spree, we see pain, loneliness, anger, irresponsibility, cruelty, self-disgust, and violence everywhere.

The filmmaker has, like the rest of us, heard the list of possible reasons for the Columbine High School shootings in 1999 and other shooting sprees by youth — media violence, the lack of gun control, irresponsible parenting, school prayer, and teenage depression. He is not interested in polemics or debate about adolescent behavior or life in suburbia. Van Sant, who won the Palm d’Or and Best Director Awards at the 2003 Cannes International Film Festival for this improvisational and non-narrative work, has cast nonprofessional students in all the roles with the exception of three adult actors.

John (John Robinson) takes over at the wheel of the family car for his drunken father (Timothy Bottoms) and drives to high school. He leaves the keys in the office after calling his brother to come pick up dad. The principal (Matt Malloy) gives him detention for being late.

Meanwhile, on the grounds outside, Elias (Elias McConnell), a photographer who is building a portfolio, asks two classmates to pose for him. Handsome football player Jordan (Jordan Taylor) wanders through the long corridors of the school and passes Nicole (Nicole George), Brittany (Brittany Mountain) and Acadia (Alicia Miles). One of them comments on how cute he is but the others caution her to keep quiet: it seems his girlfriend, Carrie (Carrie Finklea), actually slapped some girl who was oogling Jordan. The three girls go to eat and talk about going shopping. Afterwards, these three bulimics go to the bathroom and throw up their lunches.

In one of the classrooms, a group of students discuss homosexuality under the watchful eye of their teacher. In the darkroom, Elias develops one of his pictures. In the locker room, Michelle (Kristen Hicks) receives a reprimand from her gym teacher for not wearing shorts. Afterwards, this awkward and sky girl skips a shower, then goes to the library where she has a job shelving books.

In the back of a science class, Alex (Alex Frost) is pelted with spitballs. In the school cafeteria, he takes notes and is asked by a girl what he is doing. “You’ll see later,” he replies. At home in his room, there is a piano. His buddy Eric (Eric Deulen) arrives and immediately plays a violent video game (where victims are shot in the back and their legs stick up out of the ground after they’re dead) while Alex plays Beethoven’s Fur Elise on the piano. They watch a documentary about Hitler’s propaganda machine on TV and are interrupted when a delivery arrives: it is a gun they ordered through the mail. They test it out in the garage against a large stack of firewood. Alex goes to take a shower and is joined by Eric who embraces and kisses him. Armed to the hilt, they jump in the car and are genuinely excited about the adventure that is ahead of them. The last telling instruction is from Alex: ”Most importantly, have fun.” How many times have we heard athletes say in interviews that they just want to go out there and have fun?

Wittgenstein, the philosopher once said in Zen-like fashion, “Don’t think. Look!” That is exactly what Van Sant wants us to do — to see what is really present. For those who want answers, Elephant will seem lacking in substance. But when we have the patience to bear with the drama as it unfolds in all its minute details, seeing the small enables us to access insight. Or as Franz Kafka once observed: “Everyday life is the greatest detective story ever written. Every second, without noticing, we pass by thousands of corpses and crimes. That’s the routine of our lives.” 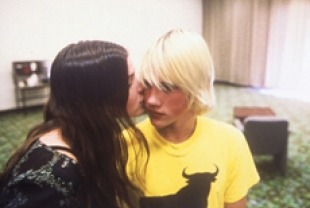