Directed by Errol Morris
A morally thought-provoking documentary in which Robert McNamara, former U.S. Secretary of Defense, discusses the lessons of World War II, the Cuban Missile Crisis, and the Vietnam War.

Can the United States learn from the mistakes of the past or is the nation doomed to replay critical errors again and again? This is the central question at the core of this exceptionally relevant and morally thought-provoking documentary by Errol Morris (Fast, Cheap & Out of Control, Mr. Death: The Rise and Fall of Fred A. Leuchter, Jr.). Robert McNamara, who served as Secretary of Defense during the Cuban Missile Crisis and the Vietnam War, talks about "the fog of war" which consists of all the complexities and variables that make any discussion of it too short-sighted and fraught with simplicities. This highly visible figure, who is now 85, was also a professor at Harvard Business School, president of Ford Motor Company, and President of the World Bank. The music of Philip Glass is used with considerable dramatic effect throughout this documentary.

McNamara, who at various times has been called a technocrat, a hawk, an arrogant loner, and a computer with legs, discusses his incredible career and power base under the rubric of eleven lessons from his life. If only the Secretary of Defense would have practiced the first lesson — "Empathize with your enemy" — early in his career, the course of American history might have been very different. McNamara discusses the Cuban Missile Crisis and the fact that luck, not rationality, saved the world from a nuclear war. The hero is a state department official who urged President Kennedy to empathize with his adversary. Of course, the U.S. weapons of mass destruction that were part of that crisis are still in place. After the Vietnam war, McNamara visited North Vietnam and discovers that whereas Americans saw the conflagration there as part of the Cold War, the Vietnamese viewed it as a civil war. Not understanding or empathizing with them cost 58,000 American and an estimated 3.4 million Vietnamese lives.

"Rationality will not save us" and "Maximize efficiency" both focus on a little known or remembered part of World War II — the firebombing of Tokyo that claimed the lives of 100,000 men, women and children on March 10, 1945. McNamara recalls this military campaign was put into place by General Curtis Le May who also wanted to blow Cuba off the face of the earth during the Missile Crisis of 1962. McNamama adds that if the allies had not won the war, both he and Le May could have been brought to trial as war criminals for the bombing of 67 Japanese cities before the Americans dropped atomic bombs on Hiroshima and Nagasaki in August of 1945. This little bit of information should have been circulated in Washington before the U.S. invaded Iraq and waged a massive aerial attack. By this point in this powerful documentary, it is quite clear that the country's leaders have not learned a thing from past wars.

The lesson that leaps out from the rest is "In order to do good, you may have to engage in evil." McNamara admits that he made mistakes in Vietnam but he refuses to assume any responsibility; instead he lays the blame squarely on the shoulders on President Lyndon Johnson. The former Secretary of Defense's response to a question about the morally objectionable use of Agent Orange during his watch is not adequate. In fact, he seems to be using the politician's ploy he explains later: "Never answer the question that's been asked of you — answer the question you wish had been asked of you."

Errol Morris asks all the right questions and that is why The Fog of War is such a riveting ethical documentary. The bad karma from U.S. misadventures in World War II, the Cuban Missile Crisis, and Vietnam continues to cast dark shadow over the country today. To all the destruction wreaked on innocent civilians in McNamara's day must now be added all the civilian dead and wounded in Afghanistan and Iraq. The policy of the end justifies the means is still America's modus operandi. But if we learn anything about "the fog of war" from this powerful film, it's that the term must no longer be used as a cover-up for the immoral use weapons of mass destruction by any nation, powerful or not.

The DVD extras include Robert McNamara's 10 lessons printed out on the screen plus 24 additional scenes, 40 minutes in all, that reveal more about the man and his career. 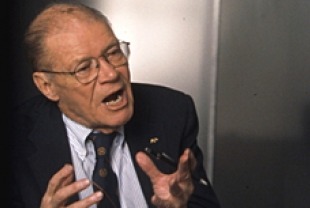 PG-13 - images and thematic issues of war and destruction