Master and Commander: The Far Side of the World

Directed by Peter Weir
A rattling good sea saga filled with two first-class performances, a memorable portrait of friendship, and a substantive exploration of leadership.

Director Peter Weir has always been a master of character drama and mood-making. Among his most notable works The Year of Living Dangerously, Dead Poets Society, and The Truman Show. In this impressive and totally absorbing film based on the seafaring novels of the late Patrick O'Brian, he delivers to our senses a brilliantly imagined world set aboard a British man of war in 1805. Master and Commander: The Far Side of the World is a rattling good sea saga filled with two first-class performances, a memorable portrait of friendship, and a substantive exploration of leadership.

Once again, Weir manages to make his characters, their adventures, and their relationships bristle with dramatic tension. He brings a distant world alive with his impeccable eye for historical detail and his respect for human idiosyncracies. He draws out Academy Award-caliber performances from Russell Crowe as the three-dimensional captain, Jack Aubrey, and Paul Bettany as Stephen Maturin, his best friend, a surgeon and naturalist. These two men share a passion for music; Aubrey plays the violin and Maturin, the cello. In addition to their eclectic discussions about authority, freedom, science, ethics, and the art of warfare, their duets of Mozart and Bach under the stars are enchanting. The musical score by Iva Davies, Richard Tognetti, and Christopher Gordon is so special that it comes across as another character in this fluid story.

The HMS Surprise with 197 men on board is sailing on the far side of the world along the Eastern coast of Brazil when it is fired upon by the Archeron, a larger and faster French ship with more powerful guns. Captain Jack Aubrey is taken aback by this surprise attack and must rely upon his years of experience to come up with a way out of the humiliating defeat in which 9 of his men die and 27 are wounded. Aubrey's friend, Dr. Stephen Maturin, has his hands full amputating the arm of a 13-year old midshipman and putting a coin in the skull wound of the crew's oldest member who has HOLD FAST tattooed on his ten fingers. After repairing the ship and stocking up on supplies, Aubrey decides to chase the French captain who shamed him. As they pursue the Archeron around the storm-tossed waters of Cape Horn, they are hit by a typhoon. Later, the exact opposite, the doldrums, puts a dent in the Captain's plans. But he has a few nautical tricks up his sleeve that put them back in the game.

Throughout the screenplay by Weir and John Collee, Aubrey demonstrates the personal qualities of an extraordinary leader. Johann von Goethe, the German writer, believed that "character is best formed in the stormy billows of the world." American essayist Helen Keller went further: "Character cannot be developed in ease and quiet. Only through experience of trial and suffering can the soul be strengthened, vision cleared, ambition inspired, and success achieved." Aubrey's character is polished and refined in his tender treatment of the midshipman who loses his arm, in the relaxed camaraderie with his officers, in his reminiscences about encounters with Lord Nelson, in the difficult decision on what to do when a man is knocked overboard into the ocean during the typhoon, in his flogging of a sailor who shows disrespect for a man of higher rank, in his comments after the suicide of an insecure midshipman, and in the choices he makes after Maturin is seriously wounded in a shooting accident aboard ship. He demonstrates presence, compassion, resolve, loyalty, openness, playfulness, vision, wonder, and zeal.

The captain is not without flaws, and his friend is there to point out the dangers posed to all when Aubrey's pursuit of the Acheron begins to look like Ahab's obsession with killing Moby Dick. After some stunning sequences filmed in the Galapagos where the surgeon gets a chance to follow his interests as a naturalist, fate bestows on Jack another opportunity to prove his nickname of "Lucky." Of course, the truly lucky ones are all those landlubbers in the audience who step aboard the HMS Surprise, smell the fresh sea air, and sense in their bones that something adventurous is going to happen on this voyage!

The two-disc collector's edition DVD has some fine extras. Most notable is the 69-minute documentary "The Hundred Days" narrated by director Peter Weir with additional comments by the cast and crew. It shows you everything you might want to know about how the film came together, including filming the spectacular scenes at sea with full-size ships. Other aspects are covered in featurettes, including one on the use of models and another on sound design. A short documentary, "In the Wake of O'Brian" covers adaptation of the novel to the screen. There are also art galleries, technical drawings, extensive scene selections, and it's all packaged beautiful in a cardboard case with a map of the voyage. 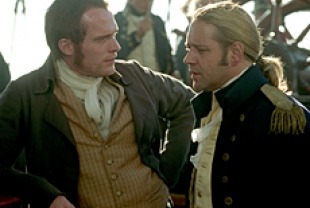 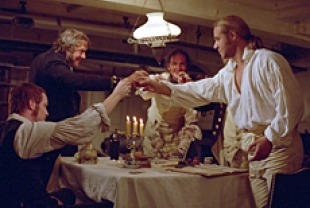 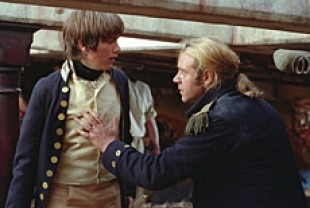