Directed by Yoav Shamir
An unflinchingly honest Israeli documentary about the humiliations endured by Palestinians every day at the hands of the Israeli soldiers occupying the West Bank.

The West Bank and Gaza Strip have been under Israeli military authority since 1967. Over three million Palestinians live under the Israeli occupation. From 2001 to 2003, Israeli filmmaker Yoav Shamir shot a documentary at checkpoints at Jenin, Nablus, Hebron, Ramallah, and Gaza. In a statement, he has said:

"Checkpoint is my own cry for help, It represents my part in the struggle against the injustices of occupation. Checkpoint was made for my people, my family and friends who represent a large side of Israeli society who choose to not know what is going on so near to us.

In this scary and brutally honest documentary, we see the ways in which Israeli power can be used to frighten, humiliate, abuse, and violate Palestinians as they try to go about their daily business. Although some of the heavily armed soldiers at the checkpoints show occasional kindness to individuals in dire straits, most of them seem to enjoy the opportunity to subject Palestinians to inconvenience and to show off their ability to control others' lives. Again and again, men and women, young and old are grilled about who they are and where they are going. The green or orange ID card is the Palestinian's most sacred possession and must be shown repeatedly. The young soldiers grow frustrated and sometimes prejudge a person as a troublemaker or a fraud. There is little respite from the tension of the job and the boring repetitiveness of it.

A playful soldier says that he is only following orders and that his superiors are the ones behind all the harassment of Palestinians. One solider listens to an American version of the song "Amazing Grace." Another proudly steps up to the camera and says that all those who reside in Ramallah are animals. Perhaps the most emotionally touching scene is when an Israeli soldier asks a clergyman to have his picture taken with him. The minister says he will do so only if the soldier puts down his gun and takes off his helmet. The man of God says, "With a gun, there is no understanding." Here are some other vignettes in the documentary:

• A row of Palestinian men are ordered to stand against the wall, to open their bags, and to empty everything on the ground.

• A school bus filled with children is detained because the driver does not have a permit.

• A guard keeps asking a four-year-old child whether or not he is sick while his father stands by him in disbelief, having already told the soldier that his whole family is going to a clinic because they are sick.

• A husband-to-be who is delivering some henna is treated as a possible terrorist and ordered to raise his shirt in the air while approached at gunpoint.

• A young mother is separated from her three young children because her papers are not up-to-date.

• An elderly man with a PLO scarf, who claims he is a soldier just like the young man interrogating him, is treated shamefully.

• A crowd of Palestinians are detained until they break through the barricades and ignore the shots fired in the air by a soldier.

This courageous and unflinchingly honest Israeli film helps us to identify with both the Palestinians and the Israeli soldiers who are all degraded by the checkpoint operations and the power plays of the occupying forces. 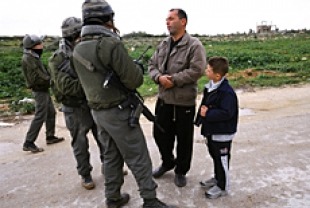