Directed by M. Night Shyamalan
A timely and spiritually rich thriller about the dangers of a fear-based culture and the soul-stirring powers of self-sacrificing love.

If you want what visible reality
can give, you're an employee.

If you want the unseen world,
you're not living your truth.

Both wishes are foolish,
but you’ll be forgiven for forgetting
that what you really want is
love's confusing joy.
— Rumi in
The Essential Rumi

To be spiritual is to have an abiding respect for the great mysteries of life — the profound distinctiveness of other people, the strange beauty of nature and the animal world, the ineffable complexity of our inner selves, and the unfathomable depths of the Inexplicable One. Through the practice of mystery, we learn to live with paradoxes and give up the idea of always understanding everything. We are able to rest in the riddle of not knowing.

In India they use the term "old soul" to describe someone who is ripe enough to experience the deepest mysteries. We usually think of mystics, not filmmakers, when we speak of these individuals, but M. Night Shyamalan certainly qualifies. This young writer and director of Hollywood movies has created a series of very unusual and popular stories that all deal, in one way or another, with mystery.

Leonardo Boff, a Latin American Catholic, has observed: 'We never 'catch up with' reality itself. The real nature of mystery always evades our attempts to conceptualize it, and escapes the nets of our language and symbolism. Its depths are never plumbed. Mystery is always linked to passion, enthusiasm and all the great emotions, in short to life's deepest and greatest impulses." Shyamalan's movies transport us to places where awe and wonder are the only appropriate responses to mysteries beyond our ken.

In Wide Awake, a boy about to enter fifth grade at a Catholic school for boys, who is deeply troubled by the death of his grandfather, decides to go on a quest to find God. The film proves how important questions can be on a spiritual journey. It also demonstrates how attention, listening and love are expressions of the sacred in everyday life.

In The Sixth Sense, the filmmaker explores the spiritual adventures of a young boy whose paranormal abilities have given him contact with the dead. With this drama, Shyamalan helps us see that we should always honor the mysterious experiences of children and also be willing to share our encounters with the supernatural with those we love.

In Unbreakable, the director compels us to consider the mystery of our own goodness. We all yearn for someone who will help us see how special we truly are. In this thriller about comic books and heroes, Shyamalan points out that within each of us a unique and glorious self awaits awakening.

In Signs, we step into a shiver story about a family that is forced to deal with strange events in their lives. This spiritual thriller challenges us to ask ourselves important questions about synchronicity, the meaning of life, death, faith and family solidarity. 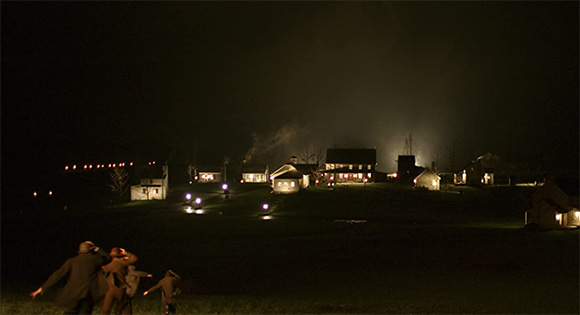 In his new film, The Village, Shyamalan uses the thriller genre to explore the value of community and the soul-stirring powers of self-sacrificing love. It is set in a late nineteenth century isolated settlement run by a somber group of elders. They are proud of the simple and harmonious life they have created apart from the world. Their children are well disciplined but they also feel free enough to have some fun with their chores, splashing water on each other or twirling around while sweeping the porch. Edward Walker (William Hurt) is the most vocal elder, and he also teaches school. He is married to Tabitha (Jayne Atkinson). Their two oldest daughers are Kitty (Judy Greer) and Ivy (Bryce Dallas Howard, the gifted daughter of director Ron Howard, in an Academy Award-caliber performance). Although blind, Ivy sees more than most in the village. She has a special way with children because of her sensitivity, and she also is very close to Noah Percy (Adrien Brody), an emotionally troubled young man.

When Kitty proposes marriage to quiet and intense Lucius Hunt (Joaquin Phoenix), he turns her down. He has not been the same since the death of a boy in the community. Lucius asks the elders for permission to undertake a dangerous mission — to travel through the woods surrounding the village to "the towns" and bring back medicine so others do not have to suffer and die needlessly. His mother Alice (Sigourney Weaver) does not know what to make of this proposal, but Edward respects the kind and noble intentions that lie behind it. She becomes more concerned when Lucius says, "There are secrets in every corner of this village. Do you not feel it? Do you not see it?"

Shyamalan has imagined a community that has as its foundations fear. Everyone is frightened of "those we don't speak of" — terrible and violent creatures that live in the forest. Although they have set up a perimeter wall with a guard tower at the edge of the woods, recently the beasts have been preying upon livestock and forcing the villagers to flee into underground shelters while they stomp on the floors above them. Red marks left on the door seem to signify that their long truce with the creatures has ended.

One day Ivy asks Lucius why he is so fearless, and he responds, "I don't worry about what will happen, only what needs to be done." Ivy, who has always been viewed as a tomboy, gets her own chance to demonstrate fearlessness when she is called upon to save the one she loves and to take the community in a new direction.

The Village is a timely, powerful, and surprising drama about the dangers of a fear-based culture that divides the world into "us" versus "them." Although safety is a universally recognized value, it can never supercede love and hope, two spiritual values that are saluted in the last third of this very fine movie. Shyamalan also makes the valid point that any community that focuses all its energies on the evil ones out there usually proves defenseless against the dark forces within its own walls.

Both the visible reality and the unseen world that Shyamalan has created in The Village remind us of his extraordinary skills as a master of suspense. But, as Rumi says, what we really want is love's confusing joy. And we are not disappointed.