Directed by Michael Radford
A scary reminder of how easily totalitarian ideas and ideals crop up in societies and take fierce hold.

Winston Smith lives on Airstrip One, a part of Oceania. He resides in a shabby one-room apartment where his movements are monitored by a two-way telescreen. Winston works for the Ministry of Truth, where he rewrites history according to the party line.

Big Brother dominates the lives of Oceania citizens through psychological manipulation via the media. The totalitarian state seems to be in a constant state of war with either Eurasia or Eastasia. Hate rallies are designed to encourage allegiance to Big Brother; dissenters are publicly executed; and natural sexual behavior is forbidden.

Winston defies the authorities when he begins keeping a diary of his feelings. He goes a step further by beginning a love affair with Julia, another rebellious individual. O'Brien, a member of the privileged Inner Party, befriends Winston but later betrays him. The maverick is taken by the Thought Police to the Ministry of Love. Then in the notorious Room 101, O'Brien proceeds to torture and brainwash Winston. His ultimate goal is to replace the man's love for Julia with love for Big Brother.

This screen version of 1984 is unrelentingly grim and ominous. Airstrip One seems more like a dank and dreary prison than a city. John Hurt is just right as Winston Smith, a stubborn individualist who refuses to reduce his life to a series of reductive slogans. Despite the haggard look, this British actor vividly conveys his character's inner fire. Suzanna Hamilton plays Julia as flinty outsider who savors sex and sees it as a sacrament. In his final screen performance, Richard Burton plays O'Brien with convincing clout; he is an efficient bureaucrat whose cool demeanor masks an ugly love of raw power.

Although screenplay writer and director Michael Radford (Another Time, Another Place) gives the drama's ending a twist that goes against the grain of George Orwell's 1984, this intense film version of the book succeeds very well in depicting the totalitarian tendencies which tend to crop up in societies all over the world. The human spirit is violated when war is made into a vehicle for peace, when truth is twisted into disinformation and language is turned upside down; when loyalty to the state is built upon paranoia and neighbor begins betraying neighbor; and when surveillance takes away personal privacy and makes all dissent a crime. While many refuse to acknowledge the present reality of this Orwellian nightmare, others know that creeping totalitarianism thrives best when it moves quietly in the shadows. 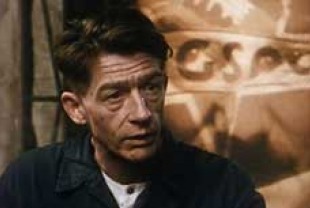 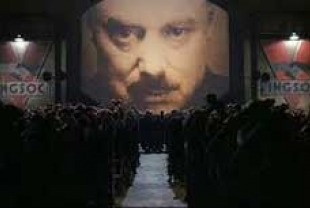