Directed by Ousmane Sembene
A triumphant ode to the bravery of a visionary woman who leads a rebellion against the practice of female genital mutilation in her African village.

Six girls run away from a purification ceremony; four of them seek shelter with Colle Ardo Gallo Sy (Fatoumata Coulibaly) while the other two are thought to have fled to the city. In this modern-day African village, female genital mutilation is a cultural tradition that has been practiced for many years. The little girls seek out Colle because she refused to let her daughter Amasatou (Salimata Traore) undergo the painful procedure. According to tribal lore, this bold woman has something going for her in an ancient spell called the Moolaade (or Protection). Anyone who tries to bring harm to the girls while they are in her care will suffer bad things. Only Colle can end the spell by uttering the right words. Those most upset by these developments are the women in charge of the mutilations; they rightly see Colle as a threat.

Meanwhile, the elders of the tribe are concerned about other changes that are affecting village life. They are campaigning to take all the radios away from the women so they will not have access to modern ideas from the outside world. One angry woman says to another: "They want to lock up our minds." But no matter how hard the men try, they can't keep out alien influences. Mercenaire (Dominique T. Zeida), a traveling salesman, brings many modern items to the village such as batteries, sneakers, candies for the children, and food. His prices are high, and he is known as a womanizer. When Amasatou goes to pick up some things for her mother, she informs him that she is going to marry the heir to the tribal throne who is returning to the village after spending some time in Paris. Her feisty grandmother later joins her on a spending spree. They charge all their purchases to the man she is destined to wed.

Writer and director Ousmane Sembene has been called "the father of African cinema" and at 81, he is at the peak of his powers. With a smooth storytelling style, he choreographs Colle's heroism as a force field that sends waves of change out to the community. She remains resolute in the face of the ominous threats by the "women in red," the ritual practitioners of female genital mutilation. When Colle stands up to the tribal elders, her husband is forced to flog her in front of the village. Many of the men shout "tame her" while the women cry out "don't say a word." She demonstrates great courage in the face of this physically painful public humiliation. Hoping that she will crack and end the Moolaade with a spell-breaking word, everyone is stunned when Mercenaire intervenes and stops the flogging. The penalty for doing so is much more harsh than he expects.

In the end, Colle is triumphant, rallying the women in the village to vow that their daughters will not be subjected to this torture anymore. The radios are set ablaze near the mosque but the imams are stunned when the tribal chief's son declares that he will not give up his television. Colle has found an old radio and keeps it hidden from others. The frustrated and defeated males in the tribe realize that the waves of change are too numerous to hold back any longer. They will have to adapt to a world of sneakers and televisions. Moolaade is an ode to the courage of a brave and visionary woman. 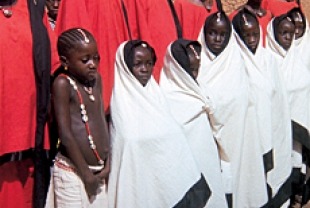