Directed by Ross Kauffman, Zana Briski
An extraordinary documentary about a photographer who draws out the wonder and the creativity of some poor kids in Calcutta.

In Welcoming Spirit Home: Ancient African Teachings, Sobonfu Some writes about villages long ago where children were treated like kings. The community knew that their gifts would carry on the legacies of the tribe, so it was the responsibility of adults to draw out the best of each child. How different is this philosophy from the attitude toward children in most places in the world today!

This unusual and emotionally affecting documentary was filmed in Sonagachi, one of the many red light districts in Calcutta where prostitutes give birth to many children they do not love or want. The children become veritable slaves in the compound where they live with little chance to attend school or venture out into the wider world. The prostitutes expect their daughters to join or replace them when they become teenagers. Men serve as pimps and spend most of the day in drug stupors or fighting among themselves. The kids witness angry customers, addictions of all kinds, thievery, and murder.

Photographer Zana Briski went to India in 1998 to take pictures of women and wound up in this crowded and filthy area of one of the country's poorest city. She met children of prostitutes and forged a bond with them. They called her Auntie Zana. Wanting to draw the kids out more, she gave them cameras and taught them how to take pictures. She then asked New York documentary editor Ross Kaufmann to make a movie of their adventures together. This documentary follows her experiences with seven kids, aged 10 through 14.

Briski and Kauffman were astonished by the curiosity, talent, and energy displayed by these kids as they take pictures in their homes, on the street, and in excursions to the zoo and the seaside. Although many of them turn out to be talented, 12-year old Avigit is a genius with a huge gift. Briski arranges for him to travel to Amsterdam for a World Press Photo Foundation program. It is a delight to watch him open like a bud to new experiences. The other kids have their shot at glory when an exhibit of their photographs is held at the Oxford Bookstore in Calcutta, and they are interviewed by local television reporters.

Not satisfied with just drawing out the children's innate creativity, Briski tries to get them placed in private boarding schools. She learns patience in her encounters with Indian bureaucracies as she tries to track down birth certificates, ration cards, and certifications that they are HIV free. And all along the way, Briski encounters resistance from the girls' mothers who do not want to lose another source of income. Only a few, including Avigit, are still in boarding schools.

Watching this documentary, we were saddened to think how many children around the world grow up in an environment hostile to their uniqueness. Briski's love and compassion for these kids is contagious, and we root for them each step along the way. This documentary makes it clear that each child has a gold mine of creativity and wonder inside that is meant to be shared with others. Those who want to help make this possible for other children can make a contribution to Briski's foundation called Kids With Cameras. She will continue to support the kids shown in the film and also send other photographers out into the world to teach children photography.

A companion book containing photographs taken by the children in the film is available from Kids With Cameras.

DVD special features include a Commentary track with Ross Kauffman and Zana Briski, Deleted Scenes with optional commentary, the featurette "Update Reel On the Children," and the Acadamy Award acceptance speech. 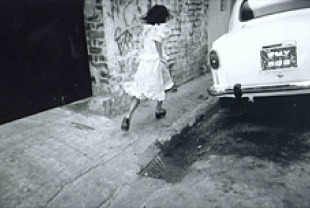 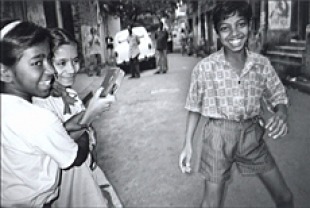