Directed by Sydney Pollack
A tense thriller which salutes openness and respect for life as antidotes to the use of violence to deal with the uncertainty of our times.

We live in world of clashing ideologies and rampant terrorism where those of differing political perspectives refuse to really listen to each other. The main form of dialogue on television and radio talk shows is shouting, and on the streets incivility and gridlock signal every individual's right to put his own needs ahead of everyone else's. Whereas the dynamic operative in these illustrations is separation, another quality is what we really need. "The begging bowl of the Buddha," Catholic monk Thomas Merton explained, "represents not just a right to beg, but openness to the gifts of human beings as an expression of this interdependence of all beings. . . . Thus, when a monk begs from the layman it is not as a selfish person getting something from someone else. He is simply opening himself to his interdependence." In our interactions with all people, we should be open like a monk with a begging bowl, open like a flower to the sun, open like an artist awaiting her muse.

The Interpreter, a political thriller set in New York City and revolving around events at the United Nations, is one of the best films of the year. Sydney Pollack (The Firm, Out of Africa, Tootsie, Absence of Malice, The Electric Horseman, Three Days of the Condor) is at the peak of his form as a director in this tightly structured drama based on a sophisticated screenplay by Charles Randolph, Scott Frank, and Steven Zaillian from a story by Martin Stellman and Brian Ward.

Most of the Western world continues to turn away from the problems in Africa — tribal warfare, genocide, poverty, famine and malnutrition, the AIDs epidemic. So it is laudable when this film boldly explores the roots of these seemingly intractable problems. The filmmakers also dare to emphasize the positive dimensions of the work of the United Nations in an era when this institution is under attack from all sides.

U.N. translator Silvia Broome (Nicole Kidman) grew up in Southern Africa and is fluent in several languages. She believes in the power of words and is all too familiar with the violence often chosen by political leaders in times of crisis. Her life is upended one evening when she returns to her cubicle to pick up her bag and overhears through the microphones a whispered voice mentioning a plan to assassinate Dr. Zuwanie, the leader of Matobo (a fictional African country in the vicinity of Zimbabwe and Mozambique, two nations that have had their own struggles with strife and war). A representative from France has introduced a resolution to send this politician to the International Criminal Court in The Hague to be tried for crimes against humanity. But action on the proposal is postponed when it is learned that Dr. Zuwanie wants to address the U.N. in a few days.

Secret Service agent Tobin Keller (Sean Penn) and his acerbic partner Dot Woods (Catherine Keener) have been chosen to protect Dr. Zuwanie during his visit to the United States. They realize that they are going to have their hands full given the Matobo leader's unpopularity. Once considered the nation's liberator, he is now suppressing all dissent and has been linked to murders. Tobin suspects that Silvia is lying about hearing the assassination threat, or perhaps involved in the plot, and grills her unmercifully. At one point, after several other intense encounters with him, Silvia uses an African term to describe how far apart they are from each other; it translates "on different sides of the river."

But as the investigation unfolds, Tobin's view of her changes. He realizes they are oddly similar — both of them are grieving. Her parents and sister were killed in Matoba when their car hit a landmine. His wife died three weeks ago in an automobile crash with her lover. When he shares with Silvia the anger he feels, she tells him about an African ritual for a community's treatment of killers. The guilty person is taken out in a boat and thrown into the lake; the community can send someone out to save him or they can let him drown. Ancestral wisdom says that the only way to end grief is to save a life. The method usually used leaves behind a poisonous residue. As Silvia puts it, "Vengeance is a lazy form of grief."

The interpreter believes in compassion and has dedicated her career to listening and openness to all. Tobin, by the very nature of his work, believes that violence can only be controlled with countermeasures based on right and might. It is this kind of spiritual dialogue that makes The Interpreter stand head and shoulders above other Hollywood fare.

Another remarkable dimensions of this political thriller is that even the subsidiary characters are memorable. Among them are Philippe (Yvan Attal), a French photographer who has experienced first-hand the genocidal fury of Dr. Zuwanie's mercenaries in Matoba; Nils Lud (Jesper Christensen), the shrewd head of Matoba security; Kuman-Kuman (George Harris), an opposition leader to Dr. Zuwanie who lives in New York; Jean Gamba (Byron Utley), a mysterious and violent man from Mabota; and Edmund Zuwanie (Earl Cameron), the threatened leader. The suspense in this film is unrelenting, and the screenplay writers have made Silvia and Tobin into such rounded characters that we can identify with them and understand what drives each of them.

The Interpreter salutes openness and respect for life as antidotes to the use of violence to deal with the uncertainty and insecurity of our times. It makes its own small contribution to peace by encouraging a respect for the sacredness of all life.

DVD Special features include audio commentary with director Sydney Pollack, an alternate ending, deleted scenes, and four documentary featurettes: Sydney Pollack at Work - From Concept to Cutting Room; Interpreting Pan & Scan vs. Widescreen; A Day in the Life of Real Interpreters; and The Ultimate Movie Set: The United Nations. 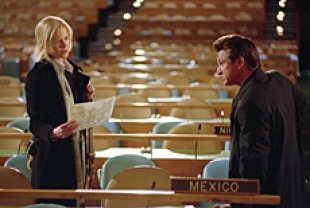