"Climbing the Waterfall" is based in part on a scene in the film The Mission. The intention is to experience being forgiven.

Breathe out three times. See yourself standing before a majestic waterfall. Find a large rope sack and place inside it, one by one, all the burdens and distresses of your life for which you feel guilty. Now begin to climb the slippery rocks alongside the waterfall, pulling the sack containing your burdens, distresses, and guilts. Feel and sense the weight of the sack, the sharpness of the rocks under your feet, the cold spray of water on your face. Knowing that this climb is your choice, how do you feel?

On the rock ledges at the side of the waterfall, meet people you have wronged. Apologize to each of them for what you have done and ask him or her for forgiveness. Greet them, one after another, no matter how they respond to you. Know that with each greeting, a burden is being released.

Breathe out one time. Reaching the top of the waterfall, enter into a rainforest, taking your sack of burdens, distresses, and guilts with you. Notice how the sack looks and feels now. At a clearing in the center of the forest, meet the being who finally removes the sack from you. As this being helps you bury the remains of the sack, know that you are forgiven. How do you feel?

When you are ready, open your eyes. 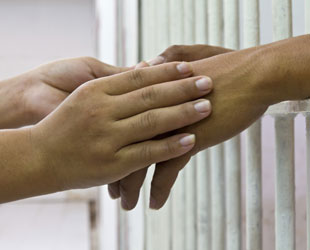