The significance of this month in the Islamic calendar when Muslims fast and intensify their spiritual practices.

It was during the month of Ramadan that the Qur'an, the holy book of Islam, was first revealed to the Prophet Muhammad by the angel Gabriel. One of the five pillars or key practices of this faith tradition is to fast during this month from the time just before sunrise until just after sunset. During the fast, total abstinence is required from food, drink (including water), smoking or consumption of tobacco, sexual intercourse, and any form of negativity — backbiting, fighting, cursing, arguing and similar behaviors. Muslims rise before dawn for a breakfast, fast through the day, and then break the fast first with dates (which Muhammad ate) and then a light meal with family and friends.

This is also a time of intensified spiritual practice. In addition to the five times a day prayer, a longer Tajweed prayer is said nightly, and sometimes prayer extends hours into the night. Many Muslims also read the Qur'an cover to cover during Ramadan. Doing good deeds and making charitable contributions are also recommended.

To Name This Month:

The Essence of the Qur'an focuses on the holy book of Islam. Shaikh Kabir Helminski and Islamic scholar Jeremy Henzell-Thomas offer 30 meditations from the Qur’an revealing the universal spiritual principles at its heart.

Beauty and Wisdom in the Qur'an, created by Iman Jamal Rahman, presents timeless insights and practices gleaned from reflections on verses of the Qur’an revealing its wisdom and beauty. The Qur’an verses will be illuminated by the insights of Islamic sages like Rumi and Hafiz who spent a lifetime meditating on the inner meanings of the Qur’an, by sayings of the Prophet Muhammad, and by teaching stories..

It is traditional to read the entire Qur'an during Ramadan.

In solidarity with Muslims around the globe, eat an odd number of dates every night just after sunset to mark the end of the daily fast.

Contemplate this poem by the Sufi poet and spiritual master, Rumi:

There's hidden sweetness in the stomach’s emptiness.
We are lutes, no more, no less. If the soundbox
is stuffed full of anything, no music.
If the brain and the belly are burning clean
with fasting, every moment a new song comes out
of the fire.
The fog clears, and new energy makes you
run up the steps in front of you.
Be emptier and cry like reed instruments cry.
Emptier, write secrets with the reed pen.
When you’re full of food and drink, Satan sits
where your spirit should, an ugly metal statue
in place of the Kaaba. When you fast,
good habits gather like friends who want to help.
Fasting is Solomon’s ring. Don’t give it
to some illusion and lose your power,
but even if you have, if you’ve lost all will and control,
they come back when you fast, like soldiers appearing
out of the ground, pennants flying above them.
A table descends to your tents,
Jesus’s table.
Expect to see it, when you fast, this table
spread with other food, better than the broth
of cabbages.
— Rumi 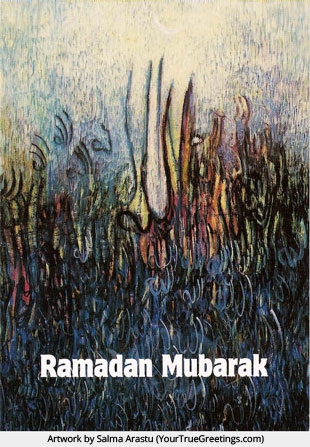