Novelist and short story writer Flannery O'Connor was born on this day in 1925. She died after a long struggle with a debilitating, incurable disease in 1964. She had a keen sense of vocation, knowing who she was and what she was put on earth to do.

Through her imagination, this citizen of Milledgevile, Georgia, spun out her own world in two novels Wise Blood (1952) and The Violent Bear It Away (1964), along with 31 tales which were gathered together in a 1971 volume titled The Complete Stories. Through the lives of country judges, landowners, farm hands, Protestant evangelists, and others who populated her fiction, O'Connor sought to convey the strange, wild and often violent ways that salvation crashes life's party and sets people off on a new course.

"The fiction writer," Flannery O'Connor once noted, "presents mystery through manners, grace through nature, but when he finishes there always has to be left over that sense of Mystery which cannot be accounted for by a human formula." Director John Huston has intuited this truth in his screen adaptation of O'Connor's novel Wise Blood (1980). The seemingly grotesque characters of this drama are very human in their religious hungers and their poignant cravings for love and recognition. Wise Blood zeroes in on the gravitational center of O'Connor's artistic and spiritual vision.

More thought-provoking material is in Flannery O'Connor: Spiritual Writings, edited by Robert Ellsberg including an excerpt from one of her letters to a book review editor on grace and mystery. 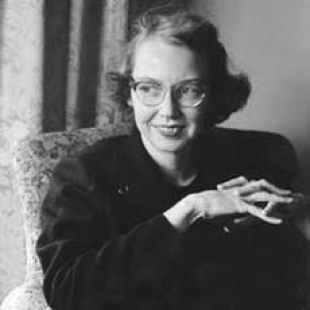