Help to repair the world by raising divine sparks as recommended by this Jewish mystic.

Rabbi Isaac Ben Solomon Luria (1534 - August 5,1572) was born in Jerusalem, raised in Egypt, and by his twenties was already immersed in the study of Jewish mystic — Kabbalah — mostly through the Zohar texts. Although he had a wife and family, he only saw them on the Sabbath. Some of his peers regarded him as a saintly figure given his conversations with Elijah the prophet and other departed souls.

Luria lived in the town of Safed in the Galilee region of Ottoman Palestine. He fed the mystical streams there with his poems and earned the nickname Ari, or Holy Lion. His disciples were called "lion whelps." Luria is most saluted for his writings on the process of creation in a three-part process: Tzimtzum, the withdrawal of the Infinite to "make space" for the finite; Shevirah, the "breaking of the vessels" into which the Infinite light (divine sparks) was poured; and Tikkun, the ongoing repair of those vessels. He taught that the divine sparks could be raised through good deeds and selfless acts of service. 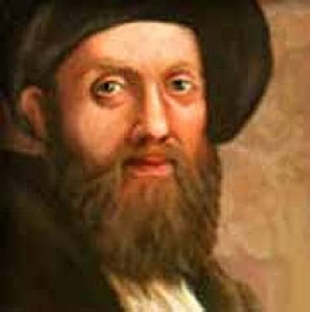