A special day to give thanks to guardian angels for being in our lives and watching over us.

Today is Guardian Angels Day, a special time to think about, appreciate, and give thanks to them for watching over us.

In tribute to these messengers of grace, we have chosen to emphasize the thoughts of Matthew Fox and Rupert Sheldrake in The Physics of Angels: Exploring the Realms Where Science and Spirit Meet. In this bold volume, they reframe the work of guardian angels. They are convinced that the resacralization of the world is the Great Work of human beings and their guardian angels.

From The Physics of Angels:

"RUPERT: Do you think there are practical ways of making friends with the angels? For example, in various Jewish ceremonies there are invocations of the archangels Michael, Uriel, Raphael, and Gabriel as the guardians of the four directions. And Christians in the Catholic tradition have a particular opportunity to make friends with the angels at Michaelmas, the feast of St. Michael and All Angels, on 29 September. Do you think there are things we can do apart from being more open to God, and the spirit of truth and justice, specifically to invoke the angels?

"MATTHEW: Yes, there are rituals and invocations that are present already in church traditions, and some that have to be resurrected. And we need new rituals to invoke angels; I think that these will come as we allow our minds to wander more into the living cosmos. Technology could play a great role in helping us envision the angels — for example, the wonderful photographs we now have of stars being born and galaxies spiraling. But I don't think we should underestimate the path of the struggle for justice and truthfulness. This is about inner work. Certainly truthfulness is. Hildegard is saying that where there is inner work, it does indeed open the communication with angels.

"The same is true in struggling for justice. Remember that angels often visit people in prison. St. Peter was liberated from prison by an angel. Sometimes I think that Gandhi and Martin Luther King, Jr., and other great souls that have spent time in prison have found angelic support there.

"So the struggle for justice is not an abstraction. It's a way of learning and a way of opening the heart. I know one Catholic sister, for example, a very fine and holy woman, who tells me her greatest mystical experience is being taken away in the paddy wagon by police when she protests at military bases and nuclear power plants — that is when she most feels the presence of spirits and the angels.

"So the struggle for justice is a path that opens our hearts up and allows angels to rush in. The struggle, certainly around ecological issues, is going to get more intense in our lifetime, and we need to see these struggles as rituals. And angels come to healthy and authentic rituals.

"RUPERT: That's an exciting prospect, the struggle for justice and the struggle for a new relationship with the environment taking place in alliance with the angels and with their help. It gives it a bigger dimension. It is an empowering thought, because otherwise it's just a handful of people fighting against huge vested interests and economic and political powers. We need all the help we can get.

"MATTHEW: And surely then guardian angels of children must be awfully interested in the ecological crisis. The children's future depends on a healthy planet."

Determine what struggles you and your Guardian Angel are going to concentrate on in future months. 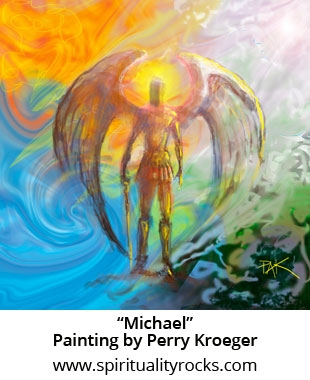