(PDP) A celebration of the former First Lady of the United States who set a high standard of leadership and activism.

Eleanor Roosevelt (1884-1962) was born into an affluent family but both of her parents died before she was nine years old. After an unhappy childhood she attended a finishing school in London. Somewhere along the way, Eleanor was transformed into a woman of great determination and leadership.

As the wife of President Franklin D. Roosevelt she revolutionized the role of First Lady by becoming an activist. Eleanor excelled in serving others as a humanitarian and civic leader. She toiled hard for the benefit of youth, black Americans, poor people, and women.

Following her husband's death, Eleanor Roosevelt continued her activism by becoming a delegate to the United Nations General Assembly; in 1948 she drafted the Universal Declaration of Human Rights. She wrote several books on her experiences and died in 1962 at the age of 78.

In celebration of Eleanor Roosevelt's birthday, using these quotes by her as inspiration, make an honest assessment of how you can best move into the future with passion, creativity, and courage. 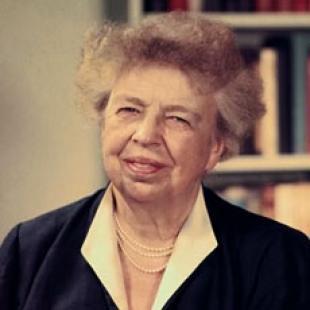