(PDP) Learning about the consequences of zeal from the story of a crusader against the use of alcohol.

Carrie Nation was a zealot who created her own personal crusade against the use of alcohol in pre-Prohibition America. She died on this day in 1911. Nation was convinced that liquor's destructive power was causing many of the problems in families and society.

In order to advance her cause, this energetic woman organized a chapter of the Woman's Christian Temperance Union (WCTU). Members of the organization chose total abstinence from all liquor and managed to gain passage of a law against selling alcohol in Missouri.

Nation and her colleagues began to interrupt what they saw as the immoral operation of illegal bars and men's clubs; they stood outside praying loudly and singing hymns. In 1900, she claimed to receive a message from God telling her to close the bars in Kansas. But instead of singing and praying, this six-foot-tall woman threw bricks and then became notorious in her use of hatchets to smash the bars. This brash form of activism enabled her to go on the road for lectures at which she sold souvenir hatchets. Nation called her method of closing saloons "hatchetation."

The Kansas WCTU gave her a gold medallion which carried the inscription "To the Bravest Woman in Kansas." Carrie Nation's personal efforts paved the way for two amendments to the United States Constitution. The Eighteenth Amendment passed in 1919, prohibiting the sale of alcohol, and the Nineteenth Amendment, ratified in 1920, which gave women the right to vote.

Nation proved herself to be a wise woman on this issue. She was once quoted as saying: "The loving moral influence of mothers must be put in the ballot box."

God's Mercy. There are many moralists and zealots in our times who believe it is their duty to make other people see the error of their ways. The result can be harmful — or even deadly — to those who are viewed as different from us.

The antidote is a change of perspective towards those who are attacked or disrespected. We can see them as brothers and sisters — who like us — are beneficiaries of the mercy of God. As William Sloan Coffin Jr. suggests in Credo, "Individuals and nations are at their worst when, persuaded of their superior virtue, they crusade against the vices of others. They are at their best when they claim their God-given kinship with all humanity, offering prayers of thanks that there is more mercy of God than sin in us."

In your journal, or in a conversation with a friend, identify some person or group whose behavior you are tempted to crusade against. Can you see them as beneficiaries of God's mercy? How does that understanding change your approach to them?

God's Eyes. Here is a spiritual practice that can work wonders by quieting our judgmental side and the crusader within us. It is from Sacred Therapy by Estelle Frankel.

"Take a moment to relax by simply paying attention to your breath. As you settle into a steady rhythm of breathing, notice that you may feel more centered and still inside. Take a few moments to just be in this relaxed state — fully present.

"Now imagine, if you can, what you might look like if you were to see yourself through God's eyes — through eyes that are filled with wisdom and loving-kindness, eyes that see with compassion and do not judge. Try to see yourself as the amazing mystery and pure being that you are."

After seeing yourself through God's eyes, try to look at those you tend to judge through eyes of compassion. 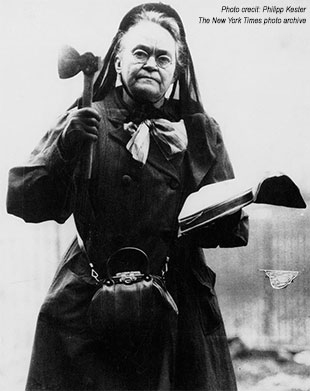