(PDP) Learning from the theologian, professor, and ethicist who wrote the Serenity Prayer.

Countless people know Reinhold Niebuhr, even if indirectly, through the Serenity Prayer which he authored and which 12-Step programs like Alcoholics Anonymous adopted. This is the version that he preferred:

"God, give us grace to accept with serenity
the things that cannot be changed, courage
to change the things which should be changed,
and the wisdom to distinguish the one from the other."

"Living one day at a time,
Enjoying one moment at a time,
Accepting hardship as a pathway to peace,
Taking, as Jesus did,
This sinful world as it is,
Not as I would have it,
Trusting that You will make all things right,
If I surrender to Your will,
So that I may be reasonably happy in this life,
And supremely happy with You forever in the next.
Amen."

This prayer picks up several of the main themes in the teachings of this Reformed theologian, Union Theological Seminary professor, and influential commentator on public affairs, who was born in Missouri on this day in 1892. Unlike those who adhered to liberal theologies popular in his time, Niebuhr counted sin into his world view, Christian Realism. He knew by observation that groups of people seek their own advantage over the needs of others and that history shows individuals as well to be tainted by insecurities and defensiveness. But he also had a trust that God could make things right and that by accepting hardship and overcoming pretensions, people could work toward peace.

Niebuhr's theology and politics morphed with changing times and his own changing circumstances. His first pastorate — after receiving a Bachelor of Divinity degree (1914) and a Master of Arts (1915) from Yale University — was in Detroit, where he became a socialist in support of laborers in the auto industry. In 1928, he left to teach at Union Theological Seminary in New York City. He remained there for more than 30 years, and in the 1930s, he broke with the Socialist party. Repulsed by World War I, he had been a pacifist, but he came to believe that nonviolent solutions do not work in all situations.

In the 1940s he became an anti-Communist Democrat, and he did much to persuade Christians of the importance of fighting Hitler. His 1952 classic, The Irony of American History, looked at America's role in the Cold War and the ease with which assumed virtue can turn into vice. He was one of the first theologians to oppose the U.S. involvement in the war in Vietnam, considering intervention to be an erroneous way of imposing solutions.

Author of more than a dozen books on theology, politics, and ethics, Niebuhr influenced people not only in his day but even up to the present, ranging from Jimmy Carter and Barack Obama on the left to John McCain and David Brooks on the right. Barack Obama wrote, “[Niebuhr] is one of my favorite philosophers. I take away [from his works] the compelling idea that there’s serious evil in the world, and hardship and pain. And we should be humble and modest in our belief we can eliminate those things. But we shouldn’t use that as an excuse for cynicism and inaction. I take away . . . the sense we have to make these efforts knowing they are hard.”

Niebuhr was awarded the Presidential Medal of Freedom in 1964. He died on June 1, 1971 in Stockbridge, Massachusetts.

Which of the following quotes by Reinhold Niebuhr inspires you to see the world in a little different way than you had been? Carry that quote with you today for reflection.

"Humor is the prelude to faith, and laughter the beginning of prayer."
— quoted in Praying with Body and Soul by Jane Vennard

"Our dreams of bringing the whole of human history under the control of the human will are ironically refuted by the fact that no group of idealists can easily move the pattern of history toward the desired goal of peace and justice. The recalcitrant forces in the historical drama have a power and persistence beyond our reckoning."
— in The Irony of American History

"My personal attitude toward atheists is the same attitude that I have toward Christians, and would be governed by a very orthodox text: 'By their fruits shall ye know them.' I wouldn't judge a man by the presuppositions of his life, but only by the fruits of his life. And the fruits — the relevant fruits — are, I'd say, a sense of charity, a sense of proportion, a sense of justice. And whether the man is an atheist or a Christian, I would judge him by his fruits, and I have therefore many agnostic friends."
— in an interview with Mike Wallace, ABC TV (April 27, 1958)

"One of the fundamental points about religious humility is you say you don't know about the ultimate judgment. It's beyond your judgment. And if you equate God's judgment with your judgment, you have a wrong religion."
— in an interview with Mike Wallace, ABC TV (April 27, 1958)

In When True Simplicity Is Gained, Martin and Micah Marty quote Niebuhr as praying, "O God, who hast bound us together in this bundle of life, give us grace to understand how our lives depend upon the courage, the industry, the honesty, and the integrity of our fellow humans; that we may be faithful in our responsibilities to them."

Write down three ways that your life depends on the courage, industry, honesty, and integrity of others. If the names of any people you know personally come to mind, you may want to share your list with them and thank them. 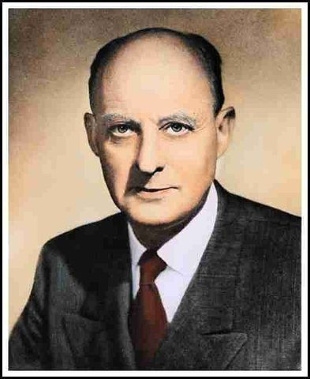