On the morning of September 12, 2001, the Wednesday class at Spirit Rock, a long-standing practice gathering of Buddhist practitioners, was larger than usual. (I was not surprised. All day the day before many places of worship in Marin County, California, had placed signs outside their buildings welcoming people who wanted to sit together quietly.) At Spirit Rock that Wednesday morning we sat quietly for a little while and then I invited people to tell the group about whatever direct personal connections they had to the event in New York the day before. Many people spoke. "My sister's brother-in-law died in Building Two." "My next-door neighbor's cousin was late for work there because his bus was stuck in traffic." "I phoned my aunt who lives in lower Manhattan and she said she could see the smoke in the sky." And then people spoke about where they were and how they felt when they heard the news. "My friend Martha phoned and it was so early I got worried that something was wrong with her and she said, 'Hurry up. Turn on the news. Something terrible is happening'." For a long time people spoke about how their minds felt and how hard it was to let the enormity of the event actually "sink in." People acknowledged feeling fearful, unnerved.

By and by, after all the people who wanted to speak had spoken, we sat quietly together for a while and then chanted, as a group, Buddhist Refuges and Precepts.

I probably said, as I always do, that the Refuges sound specific to Buddhism but can be understood as universal. "I take refuge in the Buddha, the Dharma, and the Sangha" can be understood as "I trust that wisdom is attainable by human beings, that there are established practice paths to develop that wisdom, and that there are communities of people who can support me in my own development." And the Precepts, guidelines for moral behavior, are universal:

I felt, as we chanted together, how sustaining to my spirit it was to be in a room with people prepared, at a time of such despair and fear, to rededicate themselves to kindness. It seemed the most direct balm to my feelings of helplessness and anxiety. Knowing that all over the world there were, at that moment, and indeed on all days and all moments, people rededicating themselves to kindness and compassion in the midst of a complex and challenging world is the most hopeful and inspiring thing I know. 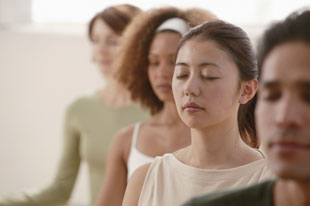