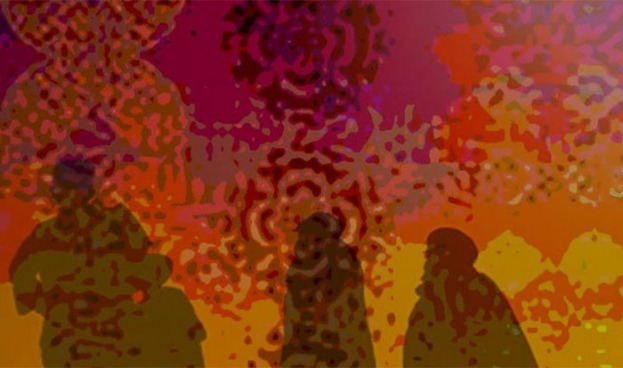 By Heer Cheema for KidSpirit's Unity and Division issue.

They are restless, moving backward and forward, surrounded by a miasma of uncertainty and despair. Sleeping in airports, caught in transition, they have no homes, because bans and war-ravaged countries are their reality. They are a reflection of my past.

Pakistani history and literature is rife with this familiar tale of displacement. Saadat Hasan Manto, an Indo-Pakistani writer, in his 1955 short story titled “Toba Tek Singh,” reflects on the anguish and loss associated with the divisions on paper that wrought destruction on millions of lives during the Partition of the Subcontinent in 1947. His protagonist, Bishan Singh, lies lost in “no–man’s–land,” unable to return home as a result of these arbitrary borders. “No–Man’s–Land” is not only a region in conflict but, as Manto highlights, a state of distress and disconnect.

Bishan Singh’s dilemma is universal, shared not only by today’s refugees and diasporas, but also by my ancestors, who experienced the partition of their beloved Punjab, the province in Pakistan and India that bore the brunt of the carnage of 1947. I have heard the story of my great-grandfather’s narrow escape from communal violence when the town of Gurdaspur was dealt overnight to India, thereby becoming a place no longer safe for Muslims. He led the way out of India and across the border into the newly etched Pakistan — uncertain, sure only of the inexorable change that had struck at the heart of his land. I have heard tell of a family house in Jullundur, India, that my grandmother visited often as a child, but neither my mother nor I have ever seen. These remnants from another time build a picture of the loss my grandparents’ generation has sustained, as this erosion continues to echo through the years, touching even those in the post-partition world.

A burgeoning friendship between a Muslim convert (my grandmother) and a Catholic Christian (her friend), which would go on for over eight decades.

It was not until recently, when my grandmother’s friend — an intelligent, witty, and staunchly determined woman — wrote that “the one thing that displaced persons know is that they will never go home again,” that I understood the poignancy of that pain. Her letter in neat cursive handwriting on cream paper taught me more about the past of my people than any school textbook. Her approach to loss was not to pit religion against religion or culture against culture to quantify the deaths synonymous with the partition of Punjab, but rather to explore the absence of the harmonious diversity that had been characteristic of her home. It was this milieu that supported a burgeoning friendship between a Muslim convert (my grandmother) and a Catholic Christian (her friend), which would go on for over eight decades. However, in the ensuing splintering of Punjab’s pluralistic tradition, unity dissolved into chaos and the two friends did not meet for most of the latter half of their lives.

The bond between my grandmother and her friend was born from a childhood characterized by tolerance, against the backdrop of a progressive Lahore. A childhood from a time when one’s religious identity did not equate to borders or barriers. The differences between my Nani and her friend served to broaden their horizons rather than narrow them.They were two individuals, destined for drastically different lives, but bound together by love and understanding. 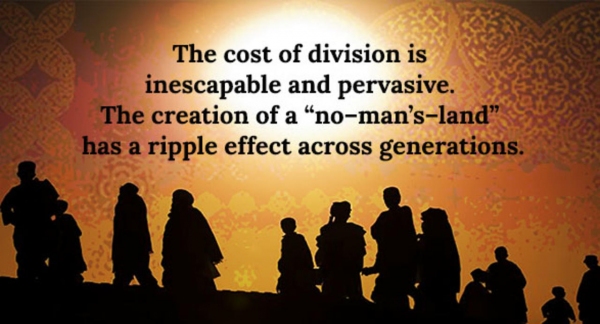 Makeshift borders delineate lives, and thus the division of Punjab separated both women across the globe, as they attempted to reconcile the loss of their home and identity. My grandmother remained in Pakistan, but her friend left the country altogether, unable to bear the mutilation of her provincial identity.

The contrast between the Punjab of my grandmother’s youth and her old age serves to emphasize the transition from unity to division, and from a richly, resonating culture to a paucity of tolerance.
In addition, it imparts an important warning, one that is relevant in the greater context of global divide. The cost of division is inescapable and pervasive. The creation of a “no–man’s–land” has a ripple effect across generations, long after the cause of the event. Today’s Pakistan battles against extremist rhetoric, which manifests in the forms of racial bias and religious prejudice, a far cry from the linguistic union this land was known to be pre-partition.

I cannot help but wonder how different my Punjab could have been.

As countries consider closing their borders and Syrian refugees are turned away at foreign shores, the discourse surrounding the idea of the refugee continues to grow ever more divisive. It is, therefore, important to remember the plight of the uprooted Bishan Singh and countless others like him. Dissociation from one’s identity is dangerous not just for the individual, but also for the community at large.

The Pakistan I know is homogeneous, largely unaccepting of diversity. The border between India and Pakistan still stands — both sides a strange reflection of each other historically and geographically. However, Pakistan’s relationship with its counterpart is tense, defined by border skirmishes, threats and deeply ingrained mistrust.

I cannot help but wonder how different my Punjab could have been. I hope that the tradition of pluralism captured in our literature and music can be revived, so that diversity and unity is not a thing of the past.

When she wrote this article, Heer Cheema was a 12th-grade student at Lahore Grammar School in Pakistan. She enjoys reading and writing poetry. Her favorite poets include A.E. Houseman and Vikram Seth.