Between the World and Me

By Ta-Nehisi Coates
A hard-hitting criticism of racist violence against the bodies and souls of black people.

"Never forget that we were enslaved in this country longer than we have been free. Never forget that for 250 years black people were born into chains -- whole generations followed by more generations who knew nothing but chains. . . . The enslaved were not bricks in your road, and their lives were not chapters in your redemptive history. They were people turned to fuel for the American machine." These are the words of Ta-Nehisi Coates, a national correspondent for The Atlantic. His hard-hitting and prophetic book is a letter to his 14-year-old son and a sequel to The Beautiful Struggle, his 2008 memoir of growing up in Baltimore. Between the World and Me (the title is from a Richard Wright poem) won the 2015 National Book Award for Nonfiction.

The book expresses Coates's fear of the streets and "the need to be always on guard" against the police, who "have been endowed with the authority to destroy your body," and the random violence of gangs. Throughout this memoir, the author expresses his rage at police killings of unarmed black men. He is especially sadden by the murder of his Howard University schoolmate Prince Jones whose body was riddled with 16 bullets from the gun of an undercover police officer.

Coates has great respect for the time he spent at Howard University, the black college in Washington, D.C., that he refers to as "the Mecca." Here as a sober-minded young man, he was moved by the writings of James Baldwin, Richard Wright, and Sonia Sanchez, and was stirred by the emotional power of poetry. But no matter how hard Coates tries, he cannot get away from his childhood: "To be black in the Baltimore of my youth was to be naked before the elements of the world — before all the guns, fists, knives, crack, rape, and disease."

Coates wants his son to know the truth and so he tells it as he sees it and has felt it in his body. The way out of fear is through a clear encounter with the racism of America. Also important is a slender but an abiding faith in the spiritual firepower of empathy and hope as revealed in the stories of black families whose sons were killed on the streets of cities across the U.S.A.

You can explore this book more deeply in conjunction with James Balwin's The Fire Next Time through this We the People Book Club guide to both books, available for download as part of the Practicing Democracy Project. 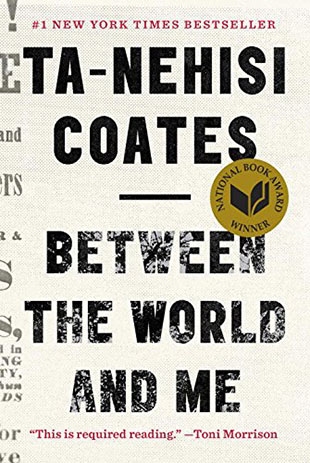