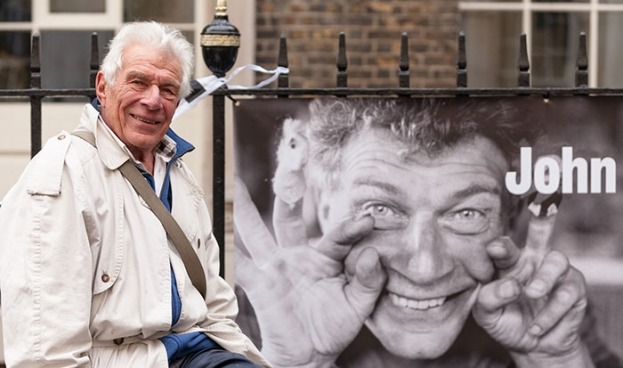 Posted by Frederic Brussat on February 2, 2017

John Berger, a world-famous polymath — critic, artist, screenwriter, novelist, poet, dramatist, artist, commentator, and storyteller — died January 2, 2017, in the Paris suburb of Antony at the age of 90. His 1972 book Ways of Seeing was a watershed work for those interested in art and other matters such as sexism, advertising, materialism, and the image-saturation of the modern world; it was made into a four-part BBC series.

"I wanted to write about looking at the world, so it's more about helping people, or persuading people, to see what is around us; both the marvelous and the terrible."
— John Berger

Born in London on Nov. 5, 1926, Berger was raised in a working-class home. At a private school, he sharpened his edges writing poetry and reading an anarchist newspaper. He ran away from school at 16, spent time in the army, and then studied art. Realizing he lacked the talent to be a painter, he became an art critic for The New Statesman. Some of his favorite artists were Rembrandt, Velazquez, Vincent van Gogh, and Frieda Kahlo.

"Art is the provocation for talking about enigma and the search for sense in human life. One can do that by telling a story or writing about a fresco by Giotto or studying how a snail climbs up a wall."
— John Berger

In 1972, the art critic's novel G won the Booker Prize. In 1974, he left London for Paris and then Geneva. In the French Alps he put together a trilogy of books called Into Their Labors which contained a mix of stories, essays, and poetry. Berger also took a shot at filmmaking by collaborating with director Alain Tanner on three films including Jonah Who Will Be 25 in the Year 2000. In 1976, actress Tilda Swinton made a documentary about him The Seasons in Quincy: Four Portraits of John Berger.

"What two different people have in common will always, in all cases, be larger than what differentiates them. And yet for dozens of different reasons, circumstances blind people to that."
— John Berger

Berger was truly a Renaissance man who shared his many creative gifts with the world. As lovers of both art and art criticism, we will miss him.

"Hope is not a form of guarantee; it's a form of energy, and very frequently that energy is strongest in circumstances that are very dark."
— John Berger