Tricks from the Elderly to Stop Worrying

Posted by Frederic Brussat on September 5, 2012 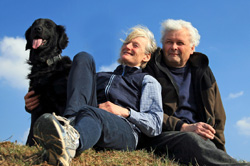 Why do we spend so much time and energy on worrying? We are reluctant to admit that we can't control everything and make what we want happen. We have trouble accepting the idea that things do go wrong. And, compounding the problem, we have been brainwashed by our culture to believe that nothing good can come out of failure, setbacks, tragedy, or messes.

According to an article in the Wall Street Journal by Shirley S. Wang, researchers are studying how people deal with worry at different stages of life. The findings were quite surprising: "Older people for the most part have far fewer negative feelings, such as worry and stress, than do younger people."

These same older people were able to pull themselves away from negativity and give themselves more easily to pleasure and the present moment. Those who are middle-age worry the most. Anger peaks in early adulthood and then begins a long, gradual decline.

Dr. Brassen, a German researcher, and her colleagues have been developing a training program to help older people work out new ways of adapting to life's circumstance. She believes that it takes practice to accept human limitations and to rest in the riddle of change.

Many spiritual traditions advocate befriending our worries and turning them into positive actions. Religious writers and teachers also are in favor of accepting human limitations as a step toward greater resilience in old age. It is time for both secular and sacred institutions to give up the stereotype that older men and women are grumpy, negative worry-warts. As a sign of solidarity with your older family members and friends, we suggest you get up and walk out of any movie, television program, or drama that demeans elders by depicting them in this shameful way.