Saved by Beauty Adventures of an American Romantic in Iran

"I walked over to the Lotfollah Mosque and went through the peculiar entranceway that turned sharply in the middle at ninety degrees. Coming upon the dome, I made my way to a corner and sat on the floor for a few minutes to take it all in. Then I lay down and gazed up. A melody of light played through the latticed arches. At the dome's center was a magnificent yellow sunburst, a bewildering forest of tendrils and blossoms, which, as I continued resting my eyes on it, revealed itself to consist of nine concentric circles, an explosion of light radiating out from deep within the small turquoise octagon at the very center. I began to see shapes within shapes, and to feel that I was being showered not only with beauty but with wisdom; for the intelligence inherent in the design and proportions was as tangible as the effect of the rain of color.

"Streaming out from the central sun to the dome's base were spiraling showers of blue lemon shapes, each one filled with intricate and delicate white designs. Numerology is an important symbolic language in Islam, with every letter having its numerical equivalent, and it was no accident that the number of those lozenges was the exact numerical total of the letters in the words God the Merciful. The lozenges ended with a thin line of white flowers that ringed the entire base of the dome, and the number of those flowers was the numerical equivalent of the word nur, meaning 'light.' But what struck me more than the knowledge was the tangible experience of blessing with which I felt showered under that dome.

"Its beauty humbled me, shattered my mind with its color and light, undid the threads of my thinking with its spiraling turquoise columns, like twisted ropes, and running Arabic script all in white against the deepest of lapis blue. Unlike any exercise in prettiness or mere display, beauty of this order is at the same time devastating and our salvation. Devastating in the sense of emptying us of self, of thought, of ordinary feeling, and our general notion of identity; salvation in that this emptying opens the way for the divine presence, the incursion, the downpouring of grace. This process of emptying and filling is at the heart of Islam, whose meaning is 'surrender.'

"In these mosques of Isfahan — in the tilework, the brickwork, the domes, everywhere — I began to see the same repeating themes: the swirling tendrils and blossoms and foliage of nature; the geometric and abstract designs of the rational intellect; and the constant refrain of the Word, the creative breath that infuses life into everything. We humans are the three in one: animal, instinctual nature; reasoning mind; and the inspired Creative Spirit of the Word. These mosques mirrored our human nature and showed what was possible for us: the integration of these parts into one harmonious whole, just as they were displayed as a glorious, organic whole over this dome and around the walls.

"For several moments even the guard disappeared and I was alone. The building seemed to breathe in the silence. In any event, the magnificence was so overwhelming that it drew me down into silence, inner silence, whether I wished it or not.

"Finally a little girl with bangs and a sort of basin haircut and huge black eyes ran into the sanctuary ahead of her mother and, seeing me, immediately flitted over and shot out her hand. I took it in mine, and we broke into broad smiles.

"The girl ran off again to her mother, and I stood up and walked slowly over to the mihrab, the niche that points to Mecca. Again, spiraling around the mihrab was a dizziness of vines in yellow on blue, and immediately above the niche was a latticed arch whose pattern was two winding vines embracing and weaving in and out of each other like lovers — which is exactly what they represented, the union of lover with beloved, the same motif that ran through all of Persian mystical poetry. In the center of the lattice, the heart of it, embraced by both vines, was a stylized version of the ancient motif of the winged man, with its echoes of Persepolis and Zoroaster. And finally, there in the very center of the mihrab, I noticed the turquoise shape of a dervish begging bowl.

"We are beggars, all of us, before the Mystery. I took my time and wandered eventually out of the sanctuary, back into the dim passageway and out into the full light of day.

"I stopped for a moment at the entrance portal again. Looking back up at the stalactite marvel above the door, I felt a wave of gratitude for the Lotfollah Mosque. It had clarified me, and revived my pride in the human race.

"An old man was sitting stooped with a cane on the ledge by the door. He beckoned me toward him with a smile. I sat down by him and he said, with a toothless grin, 'Are you happy with your life?'

" 'I am,' I said, both surprised and delighted by the simple intimacy of the question; aware even as I answered of conditions that I would perhaps like to be different, but that did not at root impinge on the happiness I felt — especially in that moment, having emerged from the most radiantly beautiful building I had ever set foot in.

"The word Michigan dissolved in the wind. Both of us sat there in the sun, looking out in silence over the square beyond.

"I felt full to the brim that night, back in my room in the Ali Qapu Hotel. It was time for me to leave this poignant, sad, and beautiful country for my own. There was a Rumi poem that voiced my feelings exactly, and I turned to it and read it out loud. 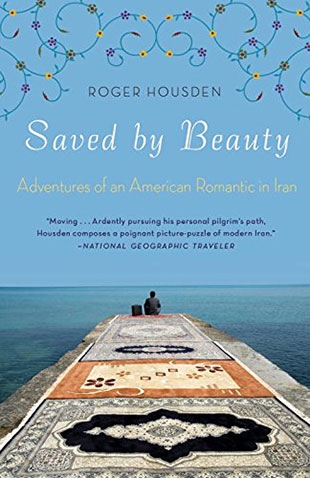