Censored 2015: Inspiring We the People The Top Censored Stories and Media Analysis of 2013-2014

"In the lead up to the [Iraq] war, the administration argued that Iraq had ties to al-Qaeda and 9/11, and that they possessed weapons of mass destruction. Even though they were lies, these two major justifications were developed with great skill, and before long the media were awash with stories that passed off propaganda as news. Shortly after the war, real proof would emerge to confirm that Iraq neither possessed weapons of mass destruction nor had ties to al-Qaeda. It was then time to highlight the Kurdish victims who suffered chemical attacks, even though the worst chemical attacks occurred when the US still considered Saddam Hussein an ally. Through selective recollections of history, victims were again produced for heroes to rescue.

"The real goal of intervention in Iraq was to advance the US's geopolitical aims in the region and to secure control over oil resources. Even mainstream figures such as the former Federal Reserve chair Alan Greenspan would admit to the oil motivation. Yet, despite the revelation of the truth behind the propaganda, the US continued its occupation, a war and occupation that led to deaths of about a million Iraqis and over four thousand US soldiers. In order to justify occupation, the masters of spin argued that the US could not leave Iraq because the country would be thrown into chaos. The US therefore had a 'responsibility' to stay the course for the sake of the Iraqis and in order to stabilize the country. We have come a full circle back to the Spanish-American War when the 'white man's burden' argument was advanced to justify US colonization of Spain's territories. More than a century later, the American public was again told that the US needed to stay in Iraq because the natives weren't prepared for self-rule.

"War propaganda has a habit of repeating itself. The all-too-real suffering of people at the hands of local or foreign oppressors has been used repeatedly to launch wars that advance an imperial agenda while forsaking the victims. Imagined attacks on ships like the USS Maine and the Maddox and real attacks like the ones on the USS Cole, Pearl Harbor, and the twin towers of the World Trade Center become moments to bolster patriotic fervor. And if slogans like 'remember the Maine,' were used by war makers over a century ago, today it is 'remember 9/11.' Then, as now, the establishment media act as the official propaganda arm of the war effort. Yesterday there was William Randolph Hearst, today there is Rupert Murdoch. But as previous wars show us, it is possible to resist the onslaught of propaganda and build an alternate agenda of peace. Students, soldiers, and investigative reporters who refused to accept the framework for Vietnam outlined by the political elite set themselves the task of uncovering the truth and then bringing that truth to the public. Today, this is exactly the burden and responsibility that a new generation must bear in relation to the ongoing, and seemingly endless, War on Terror." 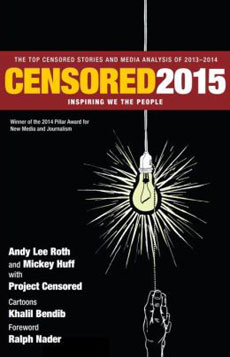