Three Cups of Tea One Man's Mission to Fight Terrorism and Build Nations . . . One School at a Time

By David Oliver Relin, Greg Mortenson
A one-man Peace Corps who has worked humanitarian wonders in Muslim communities in Pakistan and Afghanistan.

When the United States began the Peace Corps in the 1960s, the idea was to use its vast resources of human talent, ingenuity, and caring to help provide basic services to people in developing nations. The effort gained the respect of many, fostered friendships around the world, and added to the fund of good will toward America. Unfortunately, in many parts of the world today, the United States is more likely to be described as arrogant and aggressive than generous and peace-loving. But there are still heroes out there doing what they can to stem the tides of suspicion and hatred. This is a book about one of them, Greg Mortenson, a one-man Peace Corps for the twenty-first century. His Central Asia Institute as of 2005 has built 53 schools in Pakistan and Afghanistan, each with the help of local communities and with a curriculum approved by the government.

Award-winning journalist David Oliver Relin tells the awesome story of this driven young man who has worked humanitarian wonders in a region of the world where Americans are despised for their bombing campaigns and apparent indifference to the plight of civilians. The title of the book is based on the proverb that says it takes three cups of tea over many months to cement a lasting relationship. During the first cup, you are strangers; with the second cup, you become friends; and by the third cup, you are regarded as family. Mortenson is family to thousands of Muslims in small villages and refugee camps.

How did this young man get involved in a crusade of love and kindness? He was injured in an unsuccessful attempt to climb to the summit of K2 in 1993. While he was being nursed back to health in Korphe, a remote region of Pakistan, he was stunned to see the village children squatting outside in a makeshift school with no materials or instructor. After recovering, he promised a Balti tribesman that he would return and build a school.

Needing to raise $12,000, Mortenson worked as an ER nurse in California and with great zeal wrote letters to 580 celebrities, businessmen, and others asking for contributions. That didn't work and so the son of Lutheran missionaries sold everything he owned and lived out of his car while continuing this fund-raising effort. It was children who finally turned the tide. The kids in River Falls, Wisconsin, donated $623 in pennies to help build schools in Pakistan; this "Pennies for Peace" program continues today.

One of the most dramatic aspects of this crusade is the emphasis on schools for girls in areas where the Taliban banned education for them. Mortenson believes that literate girls become mothers who have a greater awareness of hygiene, sanitation, and community development. While men and boys often leave villages, the women stay behind and pass on what they have learned to the next generation. But trying to fulfill his dream has not been easy. Relin reports on Mortenson's kidnapping, fatwas issued by angry mullahs, and the death threats he has received in the United States after 9/11.

People of extraordinary character have always appeared during the fiercest cycles of hatred, violence, and aggression are most fierce. Martin Luther King, Jr. called such people "creatively maladjusted," for they are unwilling to accept war and hostility as part of the status quo. They carry on the tradition of spiritual masters from all the world's religions who teach that the greatest form of heroism is to turn an enemy into a friend. Mortenson is a spiritual hero for these bad times, providing a model of selfless service and hope for the family of humanity. 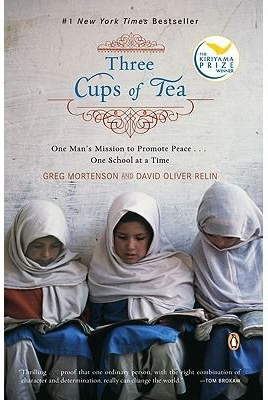