Soul of a Citizen Living with Conviction in Challenging Times

By Paul Rogat Loeb
Stories of ordinary people who have transformed their communities.

Here is a new and revised edition of a book that has sold nearly 100,000 copies, becoming a useful handbook for budding social activists, veteran organizers, and anyone who wants to make a difference in their communities. When it was first published, we chose it as one of the Best Spiritual Books of 1999.

This paperback contains new stories about people working for change during tough times, including a San Antonio woman with an eighth-grade education who testified before Congress on job-training programs for the poor, an evangelical leader who became an activist on climate change, two leaders who opposite sides politically who worked together to save Internet Neutrality, and others. This edition also explores the landscape for citizen involvement, including the role of new technologies in change movements.

Paul Rogat Loeb is an Associated Scholar at Seattle's Center for Ethical Leadership and a long-time social activist and author. In this inspiring call to a spiritual politics that grows out of engaged community, he presents the stories of "ordinary people who through practice and perseverance have transformed themselves and their communities." His witness to their valiant efforts to stem the tide of injustice, corporate irresponsibility, environmental pollution, violence, and the growing gap between the rich and the poor offers an antidote to the prevailing culture of cynicism that insists that nothing we do can matter.

Loeb writes cogently about the ways in which citizens have gotten involved, found their voices, and taken stands. Again and again, he emphasizes the necessity of grounding all activism in community — ones that are flexible and inclusive. Loeb addresses the dangers of learned helplessness, burnout, compassion fatigue, and turning enemies into implacable sources of evil. The spiritual qualities of patience and hope are essential ingredients of soulful citizenship. Loeb quotes Jim Forest who "compares the labors of social activists to those of the artisans who built the great medieval cathedrals, working generation after generation on projects whose completion most would never live to see." 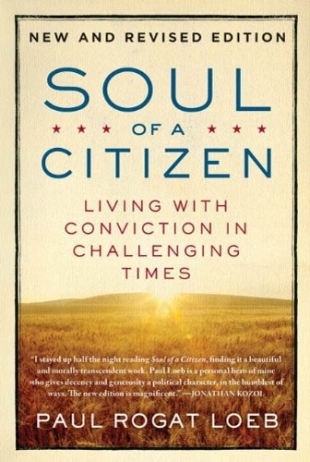