By Sue Monk Kidd
Early essays and stories from one of our best writers of spiritual nonfiction and fiction; it opens our hearts to light and love.

Sue Monk Kidd is the bestselling author of two extraordinary novels: The Secret Life of Bees (2002), and The Mermaid Chair (2005). They have sold more than six million copies to date. She has also written three spiritual memoirs: God's Joyful Surprise (1988), When the Heart Waits (1990), and The Dance of the Dissident Daughter (1996). Still, not many people have read her first work, written when she was in her thirties — inspirational stories, personal essays, and art of living pieces. This new book is a wonderful collection of those pieces written for Guideposts magazine over a 12-year period beginning in the late 1970s as well as some from other publications.

Kidd was raised in the South as a Baptist and still considers herself Christian. In an interview, she once called herself "an orthodox eclectic," a title which signals her willingness to explore different avenues toward the Divine. That spirit of questing shines through every page of Firstlight. The reader will find ample evidence of her spiritual unfolding. In a thoughtful introduction, Kidd pays tribute to one of her favorite writers, Trappist monk Thomas Merton who referred to God's presence in the soul as the pointe vierge. Kidd explains:

"This French phrase refers to the 'virgin point' that comes just before dawn, those ripening moments before the first ray of light flares into the darkness. Whatever name we give this 'firstlight,' I believe it exists in all of us. I believe, too, in the impulse to capture its flickerings through words. It seems that I'd been trying to do this in one way or another, with varying degrees of skill, experience, and success from the moment I set upon the writing life."

It was Thomas Merton's autobiography The Seven Storey Mountain that provided the catalyst for Kidd to devote her energies to being a writer. It opened up for her the startling depths of the inner life and the challenge of exploring its spiritual riches. Kidd notes: "Creativity is essentially a spiritual experience, a conversation between my soul and me." In Firstlight, the author shares many stories of her life as a daughter, a wife, a mother, a nurse, and a writer. She believes that her experiences have been a path to transformation and that readers everywhere will be able to connect with them. And she is right. The book is divided into 13 spiritual motifs,and they provide access to many of the most important thing in life. As you read them, you'll be inspired to connect with your own beginnings — "the moments when the light broke and your heart opened."

In a piece on the spiritual practice of attention, Kidd quotes Emily Dickinson: "Life is a spell so exquisite that everything conspires to break it." So much of the time we miss the magic because we are not paying attention. We are asleep at the wheel. Kidd finds value in meditative practices and contemplative exercise to fine-tune our attention so we can be more alert.

Reverence is not a word used much in popular culture nowadays but it has a long and noble tradition in the world's religions. Kidd salutes this practice while watching a meteor shower with her kids:

"One after another they come, blazing across the heavens. And without warning, a spell of reverence falls across the backyard. We lie in silence while the ground beneath us grows holy and God's presence burns across the sky, yet deep and luminous inside me too. It is a rare moment. Not because the sight is so spectacular, but because I am aware of it. Because I have been taken out of myself. My children and I have stepped out of our familiar world into wonder and beauty, and have discovered the Creator in the midst of it."

Kidd grows into a deeper appreciation of everyday spirituality and begins to see God in annoying people, peeling onions, and doing chores around the home. She marvels at "the unrestricted availability" of Jesus, how he never excluded anyone from his loving heart. Working as a nurse, Kidd has many chances to practice this kind of openness and hospitality. In one story, she stands by a man who has just learned that he has cancer. Seeing him tremble in fear, she reaches out her hand and puts it on his shoulder. He is grateful for this reassuring touch that says more than any words could in this situation.

In another story, Kidd recounts a friend who is in the hospital with searing pain in her arthritic hands has an epiphany that God is present in her suffering, in the cries of the woman in the next bed, and in the angry nurse who seems to avoid her every day. The point is made that we must deal with the dark side of pain, suffering, and setbacks as other avenues of grace and divine presence.

There are many spiritual gems in this wide-ranging collection. Other themes include compassion, solitude, silence, simplicity, letting go, and standing fast. Kidd shares several touching encounters with her grandmother and grandfather, trips to sacred sites in England and Israel, memories of experiences during her year in Africa, and many intimate insights into marriage and parenting. Whether writing about Russian nesting dolls, Charlie Brown, the creativity of Meinrad Craighead, or freckles and wrinkles; Kidd manages to make our hearts sing as she immerses us in the hugs of the Holy One who keeps on giving us glimpses of light and love. 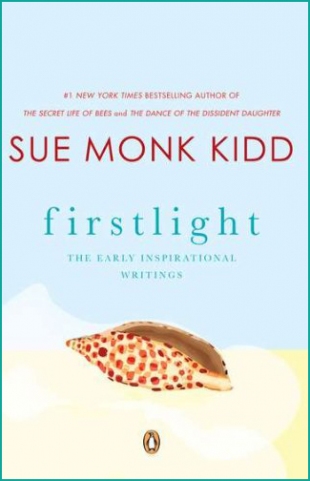