Voices of Time A Life in Stories

By Eduardo Galeano
Innovative and imaginative glimpses of the violent, wild, and crazy world we live in from one of Latin America's finest and most perceptive writers.

Eduardo Galeano is a distinguished journalist and historian and one of Latin America's foremost writers. The winner of the first Lannan Foundation Cultural Freedom Prize in 1998, he is the author of Upside Down and other books. He lives in Montivideo, Uruguay.

In this innovative and highly imaginative work, Galeano lays out the bare-bones story of his life alongside the fears, trials, tribulations, and peak experiences of others, including the world of nature and animals. The 333 vignettes present a wide-ranging and morally perceptive glimpse of a world of incredible violence, poverty, injustice, and suffering. Whether writing about presidents, generals, bums, soccer stars, or other celebrities, Galeano compels us to consider the consequences of all that we do, say, or think. Here are a few examples of his essays, translated by Mark Fried:

"We are made of time.
We are its feet and its voice.
The feet of time walk in our shoes.
Sooner or later, we all know, the winds of time will erase the tracks.
Passage of nothing, steps of no one? The voices of time tell of the voyage."

"Oriol Vall, who works with newborns at a hospital in Barcelona, says that the first human gesture is the embrace. After coming into the world, at the beginning of their days, babies wave their arms as if seeking someone.

"Other doctors, who work with people who have already lived their lives, say that the aged, at the end of their days, die trying to raise their arms.

"And that's it, that's all, no matter how hard we strive or how many words we pile on. Everything comes down to this: between two flutterings, with no more explanation, the voyage occurs."

"Joaquin de Souza is learning to read, and he practices with the signs he sees. He thinks the most important word in the world is no, because everything begins with it. 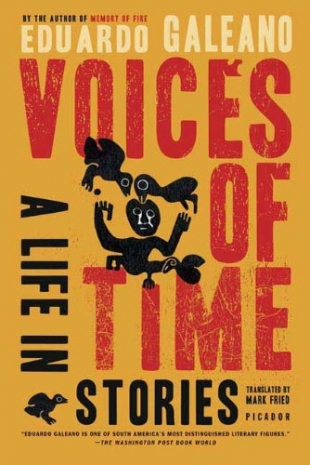