By David Batstone
An incisive overview of the global slave trade epidemic and the heroic contributions of modern-day abolitionists to stop human trafficking.

Twenty-seven million slaves exist in the world today, according to David Batstone, professor of ethics in the department of theology and religious studies at the University of San Francisco, executive editor of Sojourners, and author of the "America's Ethics Guru" column for USA Today Weekend. Men, women, and children of all ages are forced to toil against their wills in rug rooms, brothels, rock quarries, factories, and armies. These unfortunate souls are bought, sold, or forced across the world's borders to work for the personal grain of those who subjugate them. If they have thoughts of escaping, they risk losing their lives or having reprisals levied against their families.

Modern-day slavery exists in 150 countries, which serve as a source, a destination, or a transit country for this commercial enterprise which may bring in as much as $32 billion annually. That makes the slave trade the most profitable criminal activity in the world after drug sales and arms dealing. You can visit almost any city and find a thriving business that depends on commerce in human beings. And just in case you think that this has nothing to do with you, think again: "Slaves in Pakistan may have made the shoes you are wearing and the carpet you stand on. Slaves in the Caribbean may have put sugar in your kitchen, and toys in the hands of your children. In India they may have sewn the shirt on your back and polished the ring on your finger."

Batstone is convinced that widespread poverty, social inequality, rapid industrialization, and exploding population growth are enabling the slave trade. These factors animate parents to sell their children, young women to seek employment in faraway countries where they are targets for exploitation, and indigent families to accept a loan or bond that can turn into a one-way ticket to hell. In terms of the latter, it is estimated that at least 15 million people are bonded slaves in India, Pakistan, Bangladesh, and Nepal.

Batstone spells out the plight of these people considered "disposable" and lauds the innovative and heroic individuals and organizations who are doing amazing things as modern-day abolitionists. Chapter titles are:

The global campaign for human freedom begins with each and every one of us. Batstone lists things we can do right now to stop the growing human trafficking epidemic. 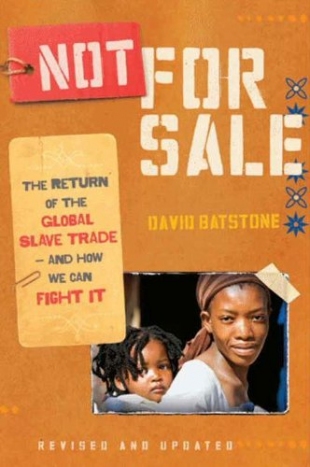