Jake Fades A Novel of Impermanence

By David Guy
A juicy Zen novel about teachers, sex and letting go.

David Guy teaches writing in the Hart Leadership Program and the Masters of Public Policy Program at Duke University. He is also a contributing editor to Tricycle and the author of Autobiography of My Body and The Red Thread of Passion. In this frolicsome novel about Zen Buddhism, death and sexuality, he beautifully conveys the impermanence of life and the fragile bonds characterizing the spiritual teacher-student relationship, parenthood, friendship, and community.

Jake is a 78-year-old Zen priest who trained for 12 years in one of the severest temples in Japan. Before that he was an art student, a cab driver, and a mechanic. He now teaches meditation out of a bicycle shop in Bar Harbor, Maine. Jake's dharma heir is Hank, a full-time student and assistant who has been with him for 20 years. He still doesn't feel up to the challenge and is worried when his beloved spiritual teacher starts showing signs of Alzheimer's disease on top of his heart condition. The two of them are on a weeklong trip to Cambridge, Massachusetts. Hank is looking forward to seeing his son, who is a film critic.

Madeleine, Jake's oldest and most devoted student, is his patron. She dreams of opening a meditation center for him to run. In a bar, Hank and his teacher meet Jess, a twentysomething beauty who works there and calls Jake "Padre." She inserts herself into their lives. and her voracious sexuality proves to be a challenge for both men. Hank is impressed with his mentor's ability to communicate: "But talking to Jake was like throwing stones into a well. A deep, still well where you never hit bottom. There was no judgment, no thinking. A helpful word now and then. Somehow, in that situation, the things you said stayed right in front of you. You saw them in a new way. The way he was seeing them. Clearly."

Jake Fades: A Novel of Impermanence by David Guy gives sex and death the respect they deserve. 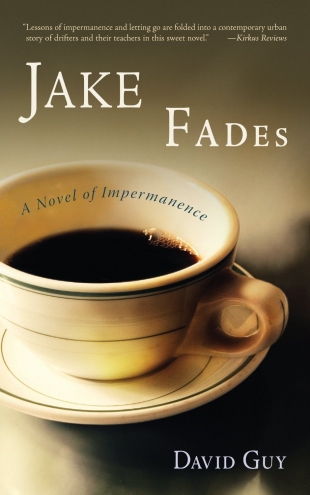