The Moral Measure of the Economy

By Chuck Collins, Mary Wright
A cogent overview of the inequalities and injustices afoot in the U.S. economy.

Chuck Collins, a senior scholar at the Institute for Policy Studies and Mary Wright, a staff member of JustFaith Ministries in Louisville, Kentucky, state that times have changed drastically since the U.S. Catholic bishops issued a pastoral letter on the U.S. economy 20 years ago. In a program on Catholic perspectives on the economy, here's what people said about the signs of current times:

• Being constantly squeezed for time and having less free time for important things.
• Having difficulty saving money or getting out of debt.
• Feeling squeezed by rising health care costs.
• Finding it hard to pay rent or afford mortgage payments.
• Fighting a commercial assault on their children.
• Dealing with feelings of job insecurity.
• Fearing for the future of their children and grandchildren in the U. S. economy.

In a cogent chapter on the difference between Gospel and market values (see excerpt), Collins and Wright state:

"Market values do not recognize the inherent worth in people except as workers, owners, or consumers. The market ranks people by their worth in the commercial marketplace, not by their inherent worth. Those who are worth a great deal command enormous salaries, perks, ownership stakes, and privileges in society. Those whom the market does not recognize as 'worth much' are invisible and are marginalized in extreme poverty."

They discuss trends which signal ever greater injustices for the poor: stagnant wages for the vast majority of workers, a growing gap between the highest-paid and lowest-paid workers, poverty that persists even during times of economic recovery, a concentration of assets and wealth among the wealthiest households, a persistent racial wealth gap, and new levels of inequality that threaten social stability, solidarity, and democracy. A quotation from Supreme Court Justice Louis Brandeis a century ago hits the nail on the head: "We can have concentrated wealth in the hands of a few or we can have democracy. But we cannot have both." The United States is now the third most unequal industrialized society after Russia and Mexico.

"Economic justice work is not a sideshow of the Gospel. It is a main event," conclude Collins and Wright. After surveying the dehumanizing inequities in the present economy, the authors present their alternatives for a just economy, outlining plenty of ideas, projects, organizations, and ways to make a difference. 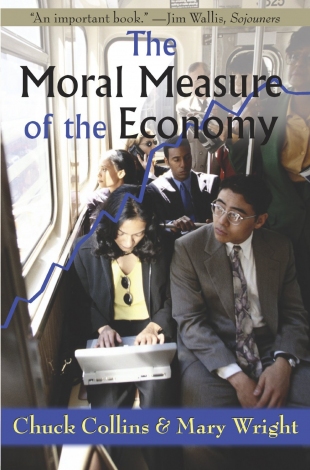