By Lama Zopa Rinpoche
Wisdom from a Tibetan spiritual teacher for students and others who have written him letters about the challenges in their lives.

Lama Zopa Rinpoche is the Spiritual Director of the Foundation for the Preservation of the Mahayana Tradition, a worldwide network of Buddhist centers, monasteries, social work projects, and other affiliated activities. For many centuries Tibetan sages have taught spiritual practices for transforming suffering into happiness. Most of us in the West are not used to thinking that blessings and good can come out of pain, problems, obstacles, and suffering. Every year Lama Zopa Rinpoche receives more than 3,000 letters from students and others asking about family matters, ethical dilemmas, and contemporary political and social situations. His replies often include calligraphy or handwritten mantras along with his advice.

This edifying paperback is divided into chapters running in alphabetical order from addiction to war with a glossary and a list of recommended mantras and practices also included. Dear Lama Zopa is edited by Robina Courtin, with Diana Finnegan and Michelle Bernard of Lama Yeshe Wisdom Archive. Interspersed between letters on epidemics, disasters, and depression are ones to Al Gore about An Inconvenient Truth, to the widow of Steve Irwin (the crocodile hunter), to Martha Stewart in prison, and to President Bush shortly after the events of September 11, 2001.

Here is a sampler of Tibetan wisdom from Lama Zopa Rinpoche:

Past Lives
• "We'd be amazed and delighted if we realized just how hard we must have worked in past lives simply to be who we are now."

Prayers and Mantras
• "Prayers and mantras give a rocket boost to our day-to-day job of developing our own minds."


World Peace
• "Each time you stop being angry by practicing patience, this becomes your most practical contribution to world peace."

Liberating Animals
• "I started a particular tradition of liberating animals in which we set animals and insects free in a safe environment. We buy worms and insects (you can also buy lobsters or fish or even bigger animals) who would otherwise be killed."

Ripening the Future Life of Animals
• "Reciting prayers and mantras into my pet's ears leaves imprints in her mind that ripen her future life."

Transform Depression
• "Transform depression into the path to enlightenment and use it to develop compassion and bodhichitta for other sentient beings." 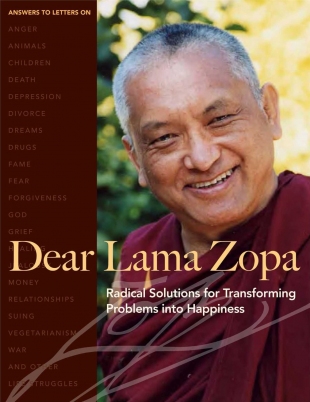