By Maggie Ross
A call for the Christian community to rethink baptism, ordination, and institutional power.

"The heart of Christianity is the self-emptying, kenotic humility of God expressed in Jesus the Christ," writes Maggie Ross, a professed solitary under vow to the Archbishop of Canterbury and author of The Fire of Your Life. In this revised version of a book first published in 1998, she uses the self-sacrificing example of Christ as a starting block for her radical rethinking of ordination and Christian education within the church. She turns to Syrian Christianity for inspiration and the theological grounding for her suggestions.

Ross is highly critical of the trivialization of baptism and the ways in which priesthood has been used to prop up power rather than to serve the community. She speaks forcefully against the clerical club and its unwillingness to admit women in many denominations. Ross calls the church to solitude, transformation, sacrifice, and freedom from fear. She believes that the seeds of the Beatitudes are within us all, but we need to water them so they will bloom in lives of service to others.

After pondering a reframing of poverty, chastity, and obedience, Ross moves on to a concluding meditation on the meaning of spiritual maturity which embraces interdependence, self-forgetfulness, living with ambiguity and paradox, and acceptance of suffering with an appreciation of God's presence working in us through it. 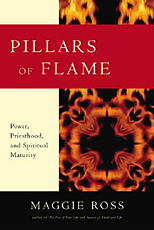