By Brian D. McLaren
A visionary work that relates Jesus and Christianity to the global crises of our time and offers love, peace, justice and hope.

The Christian religion consists of about 2 billion adherents or 33 percent of the world's population. For ten years, Brain D. McLaren has been traveling around the globe talking about the need for "a new kind of Christian" and listening to what others have to say about the state of the world. In this ambitious work, the author sets out to answer the following questions:

"Why hasn't the Christian religion made a difference commensurate with its message, size, and resources? What would need to happen for followers of Jesus to become a greater force for good in relation to the world's top problems? How could we make a positive difference?"

Looking at the fifteen global challenges outlined by the United Nations University (including sustainable development, clean water, reducing ethnic conflicts), McLaren goes on to address the three major crises facing humanity which together add up to a "suicide machine."

McLaren is convinced that a fresh framing story comes with the revolutionary vision of Jesus. That is something quite different from "the popular and domesticated Jesus, who has become little more than a chrome-plated hood ornament on the guzzling Hummer of Western civilization." The conventional treatment of Jesus has relegated him "to practical irrelevance in relation to human social problems in history: his message is about the soul, its guilt before God, and its afterlife, not about our world and its crises." To contrast this approach, McLaren outlines 12 features of Jesus' ministry that are relevant to the global challenges we face in our time. The man from Nazareth presents an alternative framing story under the umbrella of God's sacred ecosystem:

In cogent and convincing terms McLaren writes about American culture's love affair with war, the alternative of a craving for justice, the four spiritual laws of theocapitalism, seven categories of developing economies, and the carelessness of our present generation about the lives and destinies of our children and grand-children. All of this material adds up to what McLaren rightly calls "a wild and radical believing."

Let's hope that faith communities around the world will study and put into action Jesus' creative and transforming framing story as an option to the reigning suicide machine. Let's hope that Christians will find a new way of living based on love, peace, and justice. 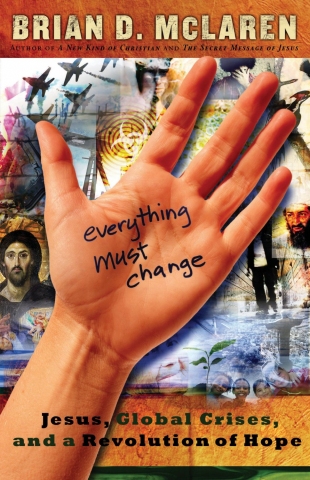