Getting a Grip Clarity, Creativity and Courage in a World Gone Mad

By Frances Moore Lappe
A political vision of hope and a new brand of living democracy.

Diet for a Small Planet by Frances Moore Lappe has sold three million copies and helped people see the value of a plant-centered whole foods diet. In 2000 the author and her daughter Anne went on a pilgrimage to five continents in search of courageous individuals and groups working at "hope's edge" to heal our threatened planet. In this passionately presented paperback, Lappe outlines the shape and vitality of a fresh political approach where citizens use their voices and values to shape a new culture. The book is also about "learning to see the killer ideas that trap us and letting them go. It's about people in all walks of life interrupting the spiral of despair and reversing it with new ideas, ingenious innovation — and courage. It's about finding that mixture of anger and hope to energize us for this do-or-die effort."

People are depressed in these hard times. This is an aspect of what Lappe calls "Thin Democracy" where corporations have too much influence in Washington, where citizens feel powerless, where the emphasis upon unbridled materialism creates a meaning void. The alternative is "Living Democracy" which is 1.values guided, not dogma driven, 2. learned, not automatic, 3. power-creating, not controlling, and 4. everywhere, not isolated. Lives are already being changed under this new way of seeing and they are being driven by a communications-knowledge revolution, a networking revolution, a revolution in human dignity, and an ecological revolution:

• "Citizens are reclaiming their political power from the grip of concentrated wealth.
• "Citizens are striving to make government their tool: a fair-standard setter, a public convener and more — so government isn't burdened by the job of damage control.
• "Investors, savers, and purchasers are infusing democratic values into their everyday economic choices.
• "Citizens are setting values boundaries within which corporations function.
• "At the same time even some mega-corporations are redefining the bottom-line to align profit with the prospering of the planet.
• "In thousands of schools and universities, students are learning democracy by doing it."

Lappe has some cogent things to say about power, the ten arts of democracy, and the cycle of hope that is replacing the cycle of fear. This paperback offers hope, the kind that Albert Camus was talking about when he wrote, "Hope remains only in the most difficult task of all: to reconsider everything from the ground up, so as to shape a living society inside a dying society." 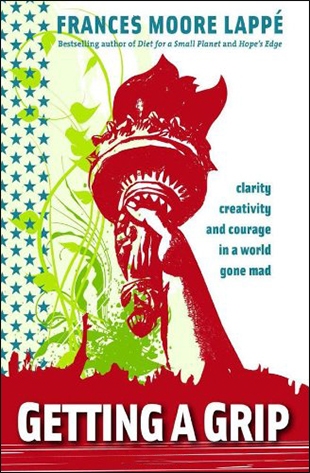